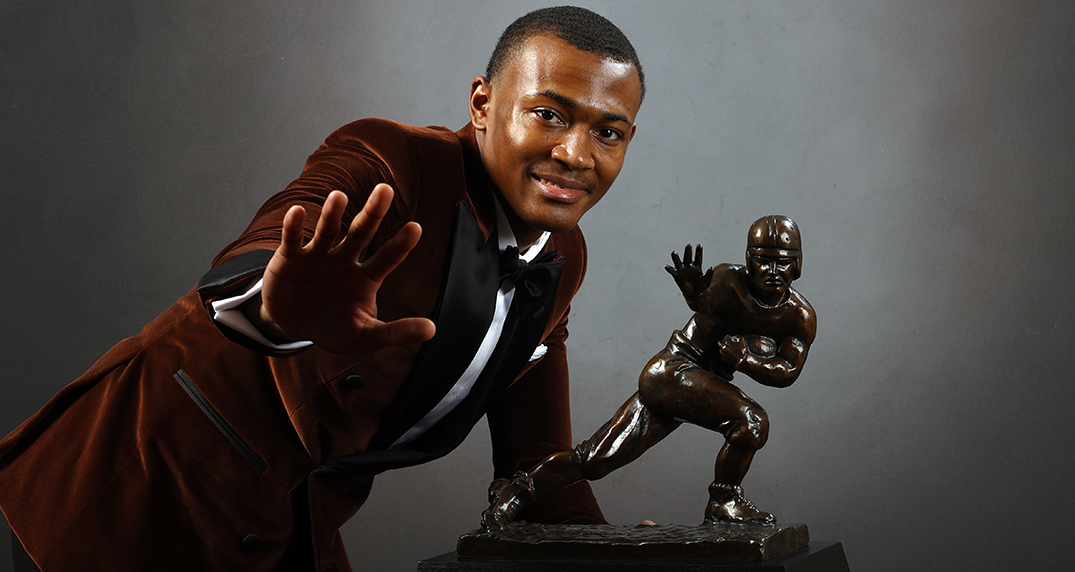 Wide receiver DeVonta Smith from the University of Alabama was announced as the 86th winner of the Heisman Memorial Trophy during ESPN’s 2020 Heisman Trophy Ceremony Presented by Nissan on Tuesday (Jan. 5) originating from Bristol, Ct.

The senior, who joined fellow finalists teammate Mac Jones, Clemson’s Trevor Lawrence and Florida’s Kyle Trask, accepted the honor awarded to the most outstanding player in college football while on the Alabama campus following a practice.

“I congratulate all the finalists,” Smith said. “Just to be in this situation with you guys, y’all are great athletes, and just to be a part of something like this is truly a blessing. I want to thank my family, my mom, my dad, just everything that y’all taught me to mold me into the young man I am today. I want to thank my mentor, Vincent Sanders. Without you I wouldn’t be where I am today, just from the rise to taking me places that I want to visit, just to doing things and just helping me get to where I am.

“I want to thank Coach Saban for giving me the opportunity to come play at the University of Alabama. I thank Coach Wiggins, my receiver coach, just for helping me day in and day out, watching film, making me a better player. I thank my teammates. With team success comes individual success, so without y’all, I wouldn’t be where I am today, winning this award.” 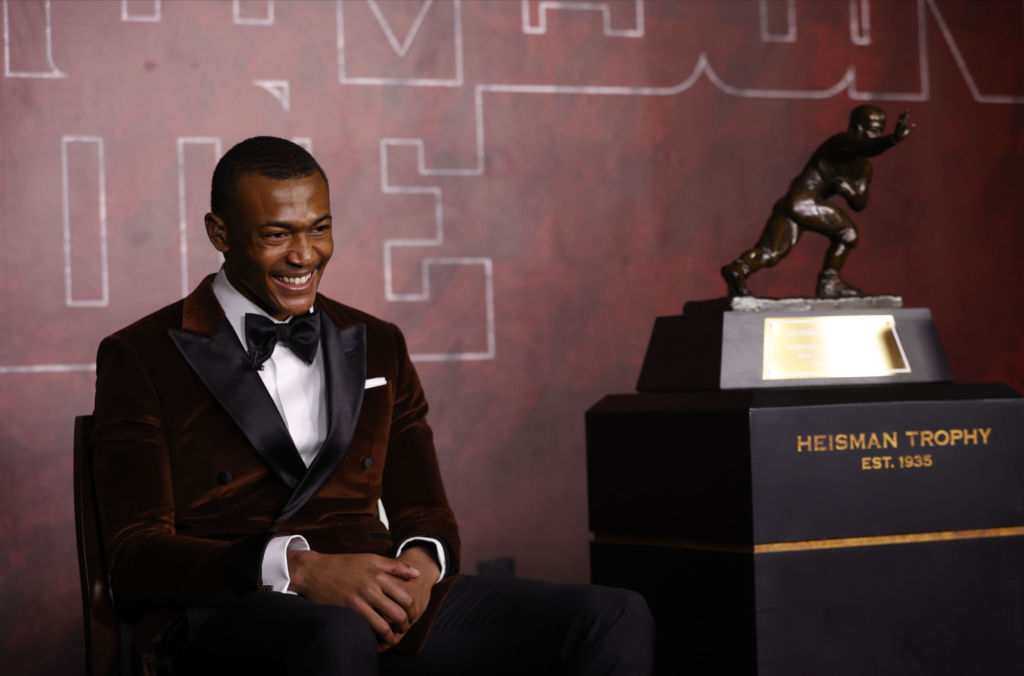 The 6-foot-1, 175-pound Smith had an outstanding senior season, most recently helping lead No. 1 Alabama to the College Football Playoff championship game with a win over Notre Dame in the semifinals. He was named the 2020 SEC Offensive Player of the Year while leading Alabama to the SEC title and the top seed in the CFP.

In 11 games (including the SEC championship), Smith led the country with 98 receptions and 1,511 receiving yards – the most by any Heisman winner in either category, topping the previous record holder, Howard (950 receiving yards on 61 receptions in 1991).

— DeVonta Smith’s comments on ESPN after winning the award —

Smith’s 17 TD catches – the second-most in a Heisman season behind Howard – and 137.4 receiving yards per game were both second-best nationally and his 8.9 receptions per game were tied for second best.

He posted four games with 11 or more receptions, including a career-best and SEC title-game record 15 against Florida, 13 at Mississippi and 11 each against Georgia and Mississippi State. He recorded seven games with over 100 yards receiving (all with at least 144 yards), including 231 yards on eight catches at LSU, 203 against the Bulldogs (which included a season-high four TDs) and 184 yards against the Gators.

Smith had six games with at least two TD receptions, three coming at LSU and two in the SEC title game. Smith also returned a punt for a TD for the first time in his career, going 84 yards at Arkansas in the regular-season finale.

In his first game after being named a finalist, Smith equaled his career-high with 15 receptions to go with 184 yards and two TDs in a Jan. 1 win over Notre Dame.

Smith is just the second No. 6 to win the award, joining Oklahoma’s Baker Mayfield (2017). He is also only the second Heisman winner born in Louisiana, joining Texas A&M’s John David Crow (1957).

Smith is the 32nd Heisman winner from the Southeastern Conference and its second in a row following Joe Burrow of LSU in 2019. He is also the seventh Heisman winner to take part in the College Football Playoff, joining Jameis Winston, Marcus Mariota, Henry, Mayfield, Kyler Murray and Burrow.

The 2020 Heisman Trophy ballots went out to 927 electors, which includes 870 members of the media, our 56 living Heisman winners and one overall fan vote presented by Nissan, our premier partner. All ballots were submitted electronically to the independent accountants at Deloitte.

The complete results for the 2020 Heisman Trophy