Hart was Notre Dame’s third Heisman winner and the last of two ends to win the award. He is also the largest Heisman winner in history at 6-5, 260 pounds.

Born in Pittsburgh, Penn., Hart grew up in Turtle Creek, a suburb of the Steel City. Leon quickly became the best player on Turtle Creek High’s basketball and football teams. The football squad, in fact, did not lose a single game in his four varsity seasons. Penn, Columbia, Tennessee, Pitt, and VMI all wanted Hart’s services, but he chose to play for Notre Dame and legendary coach Frank Leahy.

No one else in the country combined his size, speed, and pass-catching ability. He was Notre Dame’s most effective blocker and was also fast enough to dart into the backfield and take (or fake) handoffs on end-arounds. His explosive acceleration out of his three-point stance also made him a valuable short-yardage fullback. On defense, he called signals and was immovable off the edge.

Hart became Notre Dame’s starting end on both sides of the ball as a sophomore in 1947. His blocking helped clear the way for John Lujack, who masterminded the team’s T-formation offense and won the Heisman Trophy for his troubles. Hart also caught a huge TD pass from Lujack in the team’s 27–7 victory over Army. The Irish went undefeated in nine games to repeat as national champions.

He established himself as the best all-around end in the country in 1948, catching 16 passes for four touchdowns to garner consensus All-America honors. With Hart leading the way, the Irish established a new school record for rushing yardage and finished unbeaten once again.

As a senior, Hart caught 19 passes for 257 yards and five touchdowns, rushed 18 times for 73 yards and recovered three fumbles on defense. Notre Dame again went undefeated and Hart was award the Heisman Trophy over Charlie Justice of North Carolina.

A four-time letter-winner, Hart never played on the losing side during his years in a Notre Dame uniform as the Irish went 36-0-2 and claimed three national championships. He became a three-time first-team All-American and a consensus choice as a junior and senior. In 1949 he was voted the Associated Press male athlete of the year, outpointing such famous names as Jackie Robinson and Sam Snead. He also received the Maxwell Award as top collegiate player in 1949.

The first pick of the 1950 NFL draft, Hart went on to play eight seasons with the Detroit Lions, helping the team to three NFL titles and earning all-pro honors on both offense and defense in 1951. After football, Hart headed up a variety of business enterprises, including the manufacture of tire-balancing equipment. He passed away on Sept. 24, 2002.

He was elected to the National Football Foundation and Hall of Fame in 1973.

Complete game-by-game statistics for Leon Hart’s 1949 season are unavailable at this time.

Here are his Heisman season totals for 1949: 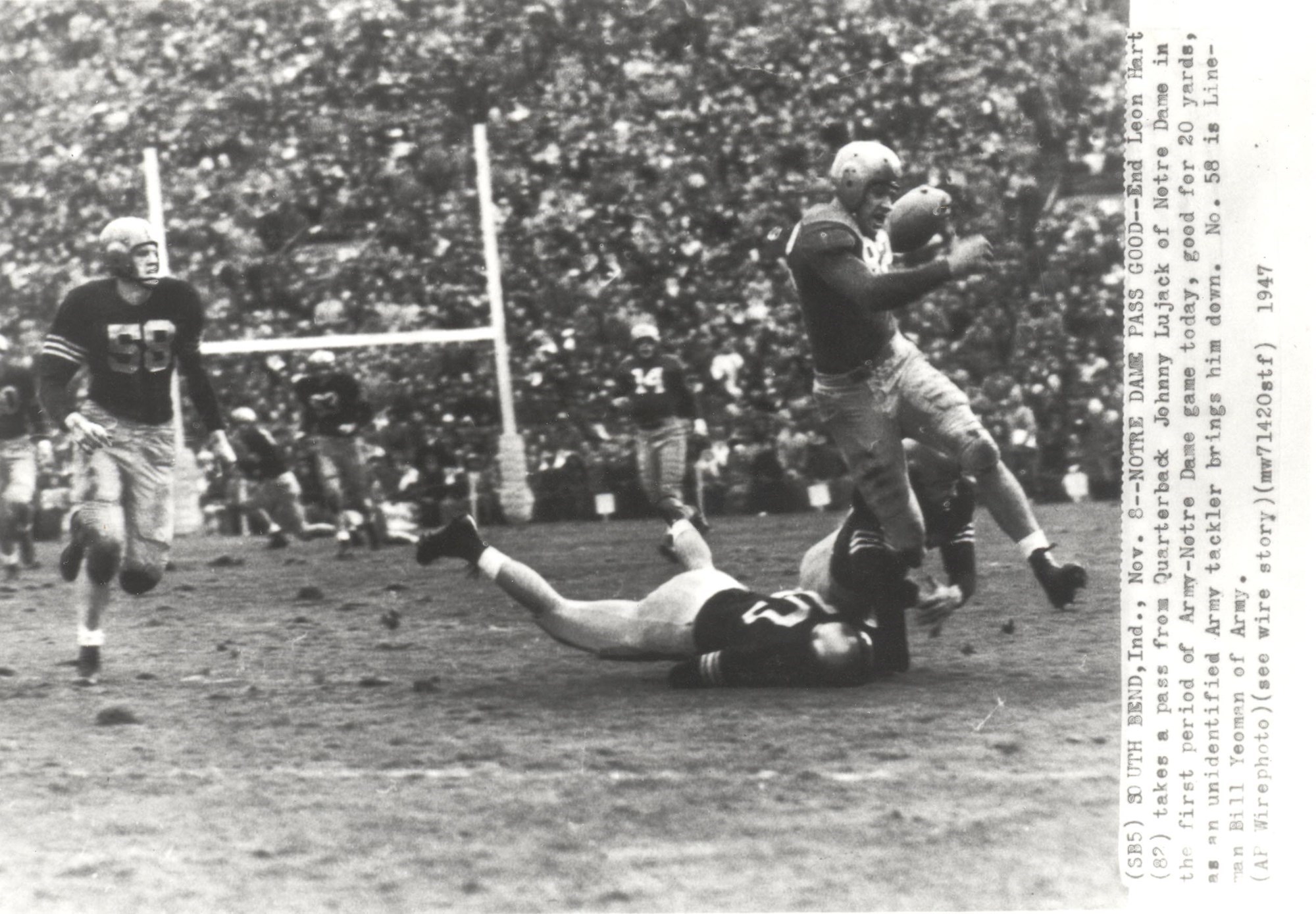 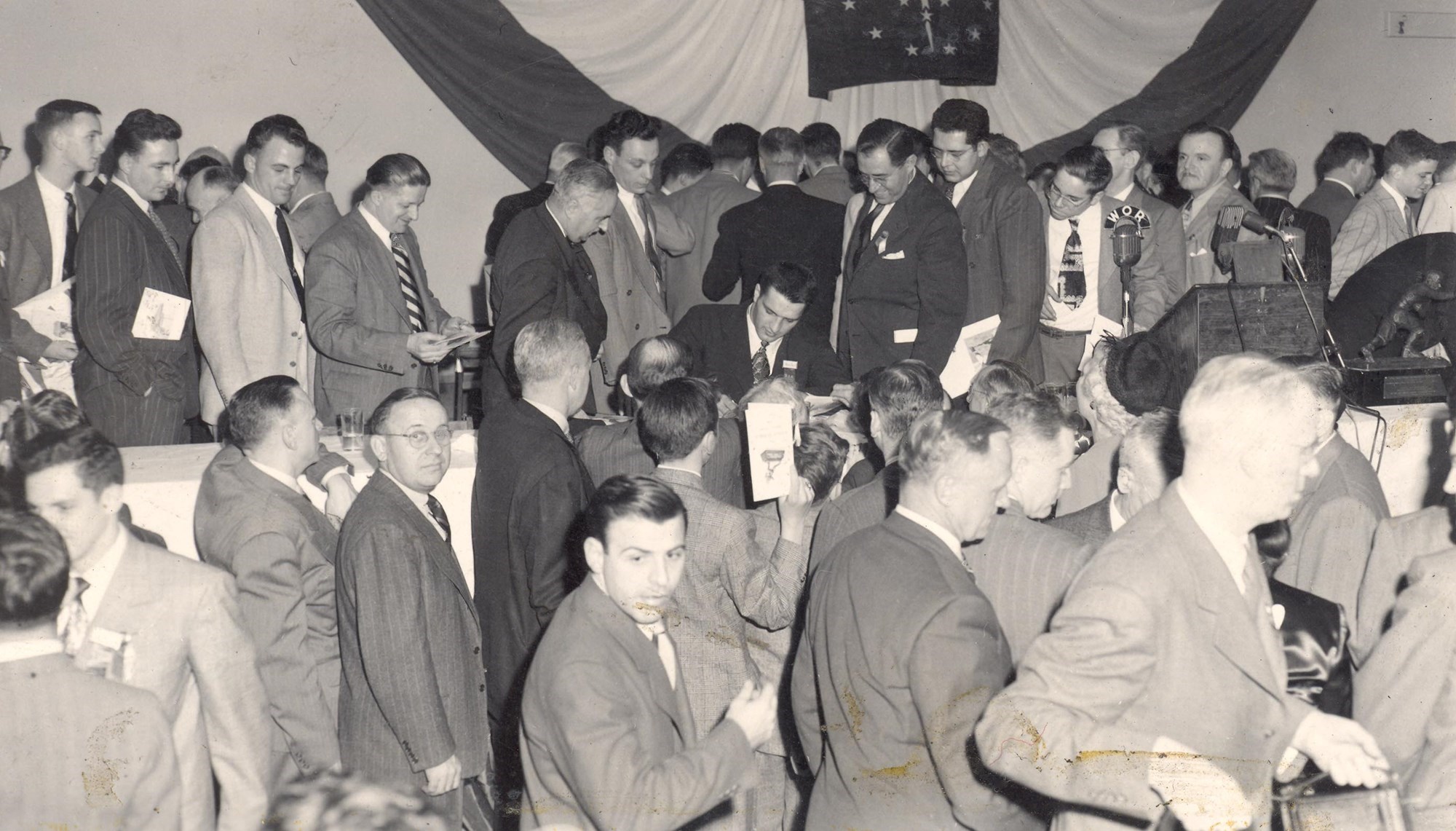 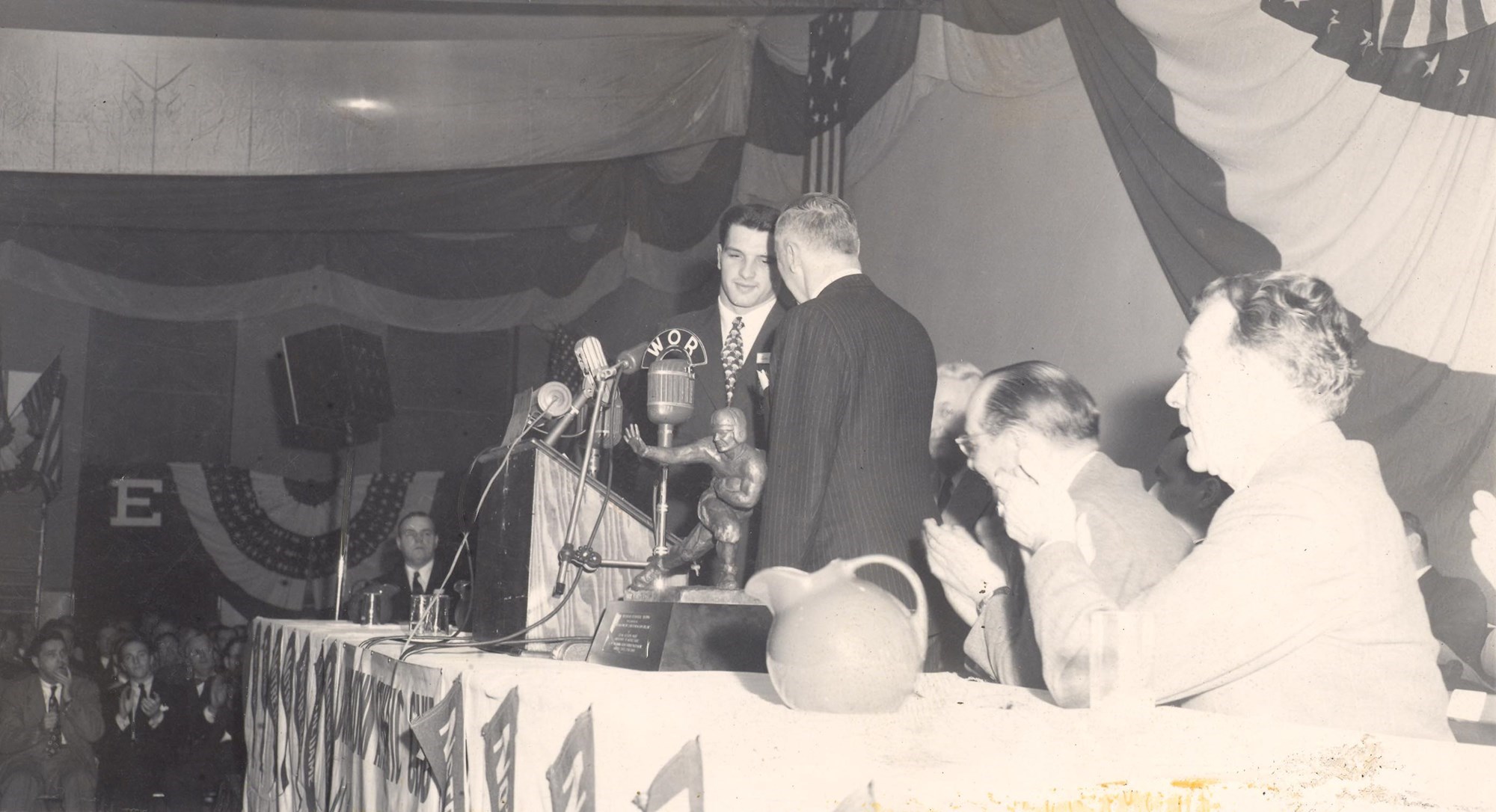 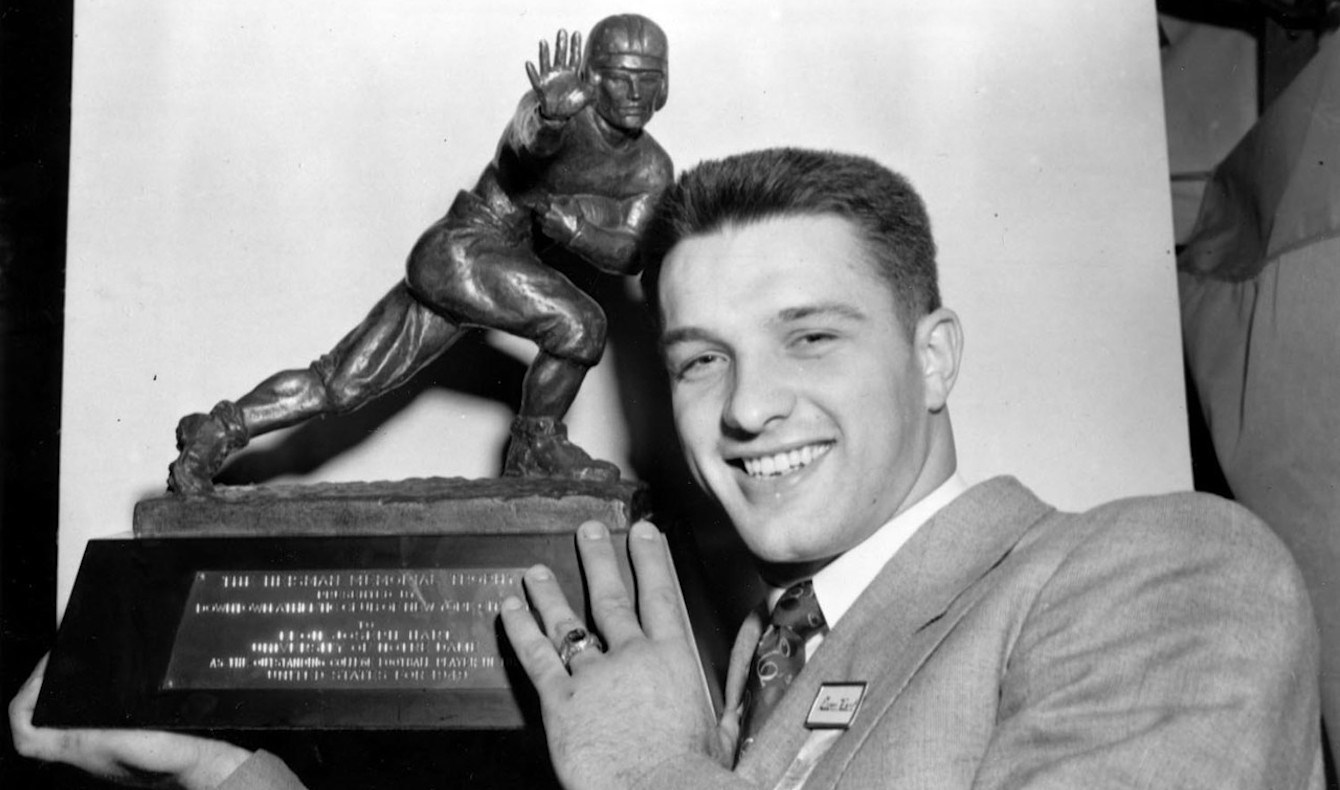 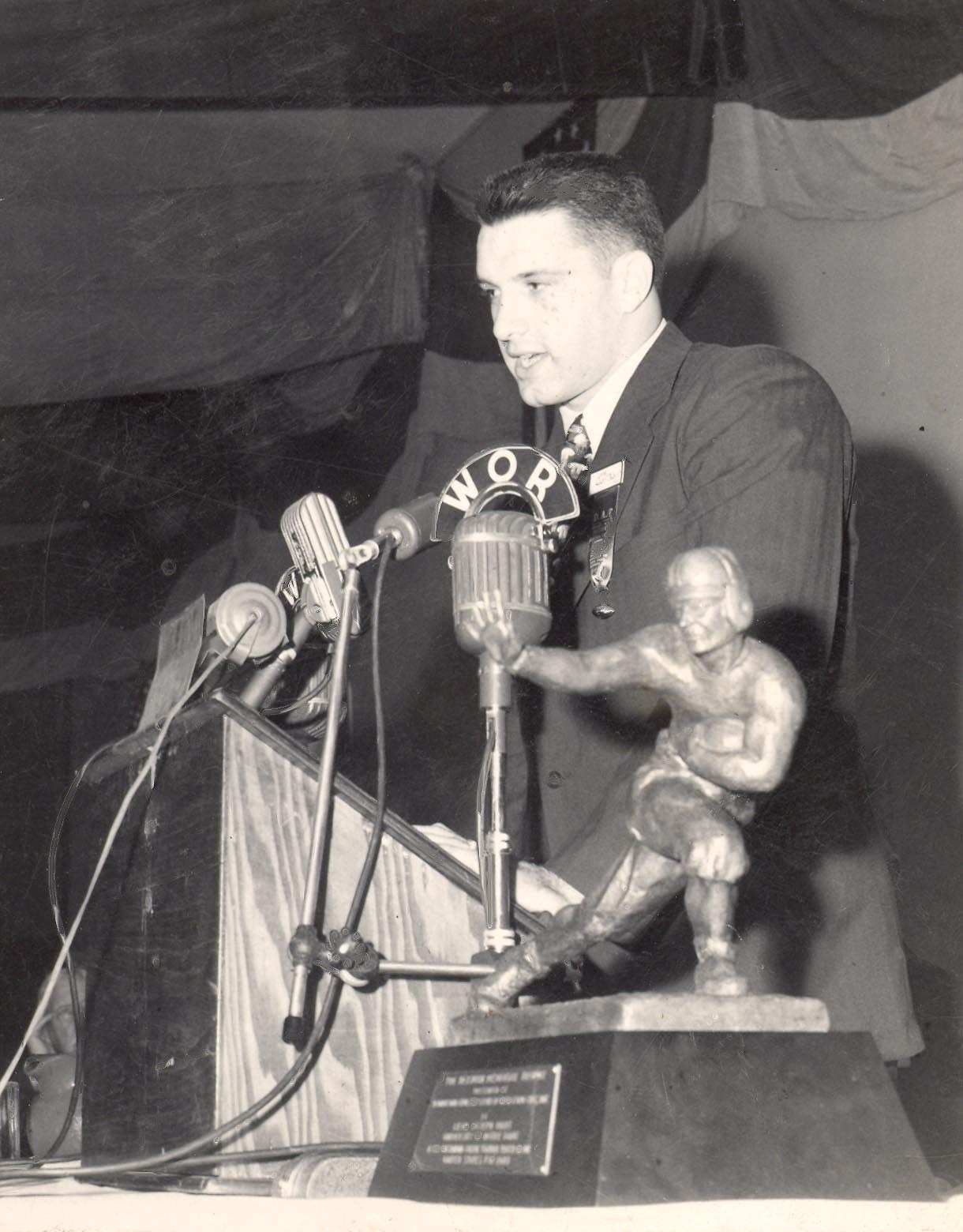 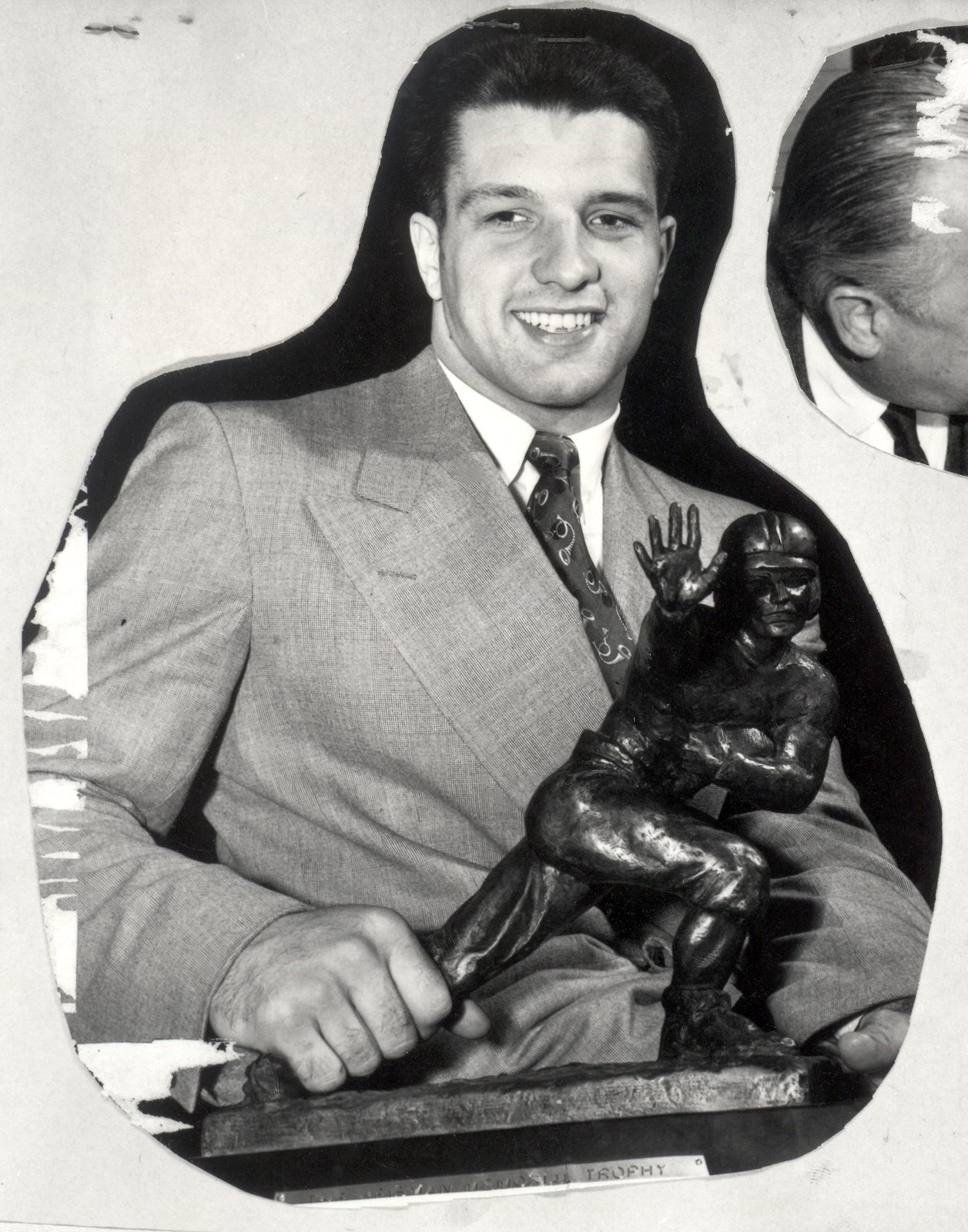