In 1975, Griffin became the first player ever to win a second Heisman. Twenty-eight years later he is still the only player to have two of the coveted bronze statues, which go annually to the nation’s top college football player.

Born in Columbus, Ohio, Griffin rushed for 1,787 yards and scored over 170 points in 11 games, including 29 touchdowns, as a senior fullback at Eastmoor High in Columbus in 1971. That year he led Eastmoor to the Columbus City League championship, rushing for 267 yards on 31 carries in the title game against Linden-McKinley High School.

Griffin signed with Ohio State and was the Buckeyes’ starting tailback for four years, leading Ohio State to a 40-5-1 record and four Big Ten titles between 1972 and 1975. He started in four-consecutive Rose Bowls, the only player ever to do so, and was a three-time first-team All-American.

At 5-9 and 180 pounds, Griffin was small by college football standards even then, but he played with the heart of a lion and no football accomplishment was beyond his reach.

In just the second game of his freshman year, Griffin ran for a school record 239 yards. It was the start of a brilliant career that would see him amass an OSU record 5,589 yards and 26 touchdowns.

He finished his freshman year with 867 yards and followed that up with 1,577 yards as a sophmore. As a junior, he rushed for a career-best 1,620 yards and 12 touchdowns to win the Heisman, becoming the fourth Buckeye to do so.

Griffin rushed for 1,357 yards and seven touchdowns as a senior, leading Ohio State to an 11-0 record, a No. 1 ranking and a Big Ten title. He was awarded his second Heisman, beating out Chuck Muncie and Ricky Bell.

Excluding bowl games, Griffin rushed for a then-NCAA-record 5,177 yards on 845 carries. Between his sophomore and senior seasons, Griffin ran for 100 or more yards in 31 consecutive regular-season games, still an NCAA mark.

In addition to two Heisman Trophies, Griffin also has a pair of Silver Footballs. The latter award is presented annually by the Chicago Tribune to the Big Ten’s MVP. He is one of just three players to win that award twice. Griffin also was a two-time pick as National Player of the Year by both United Press International and the Walter Camp Foundation. He won those honors as a junior and senior.

Following his senior year, Griffin, who graduated a quarter early with a degree in industrial relations, received the NCAA’s prestigious Top Five Award for combined excellence in athletics, academics and leadership. It is the highest award the NCAA can bestow.

After graduation, Griffin was a first-round draft choice of the Cincinnati Bengals. He played eight years of professional football, before returning to Columbus and joining the staff at Ohio State. He served over a decade as the President and CEO of the OSU Alumni Association.

Griffin’s No. 45 was retired at halftime of the Ohio State vs. Penn State game on Oct. 30, 1999. He was elected to the National Football Foundation and College Hall of Fame in 1986. 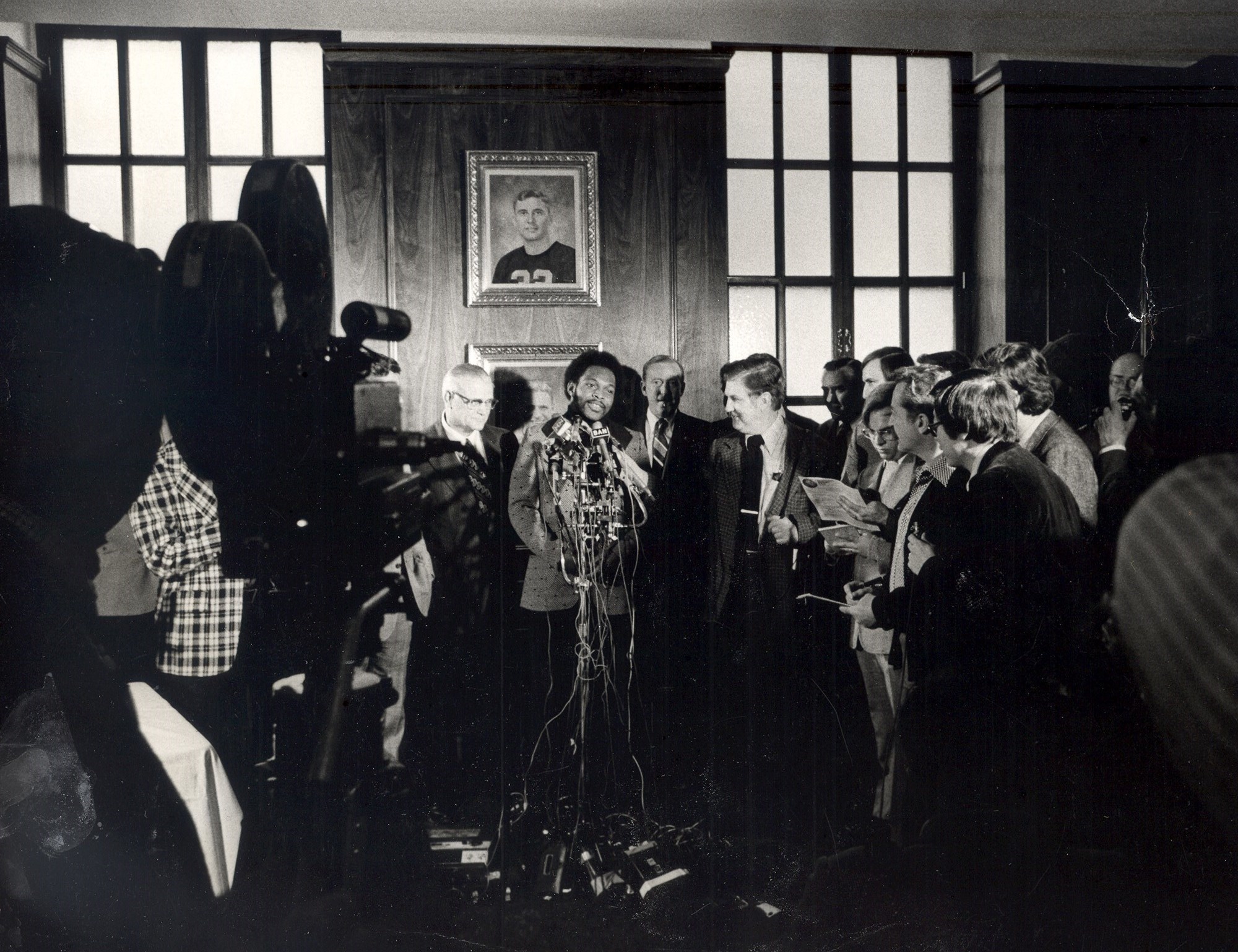 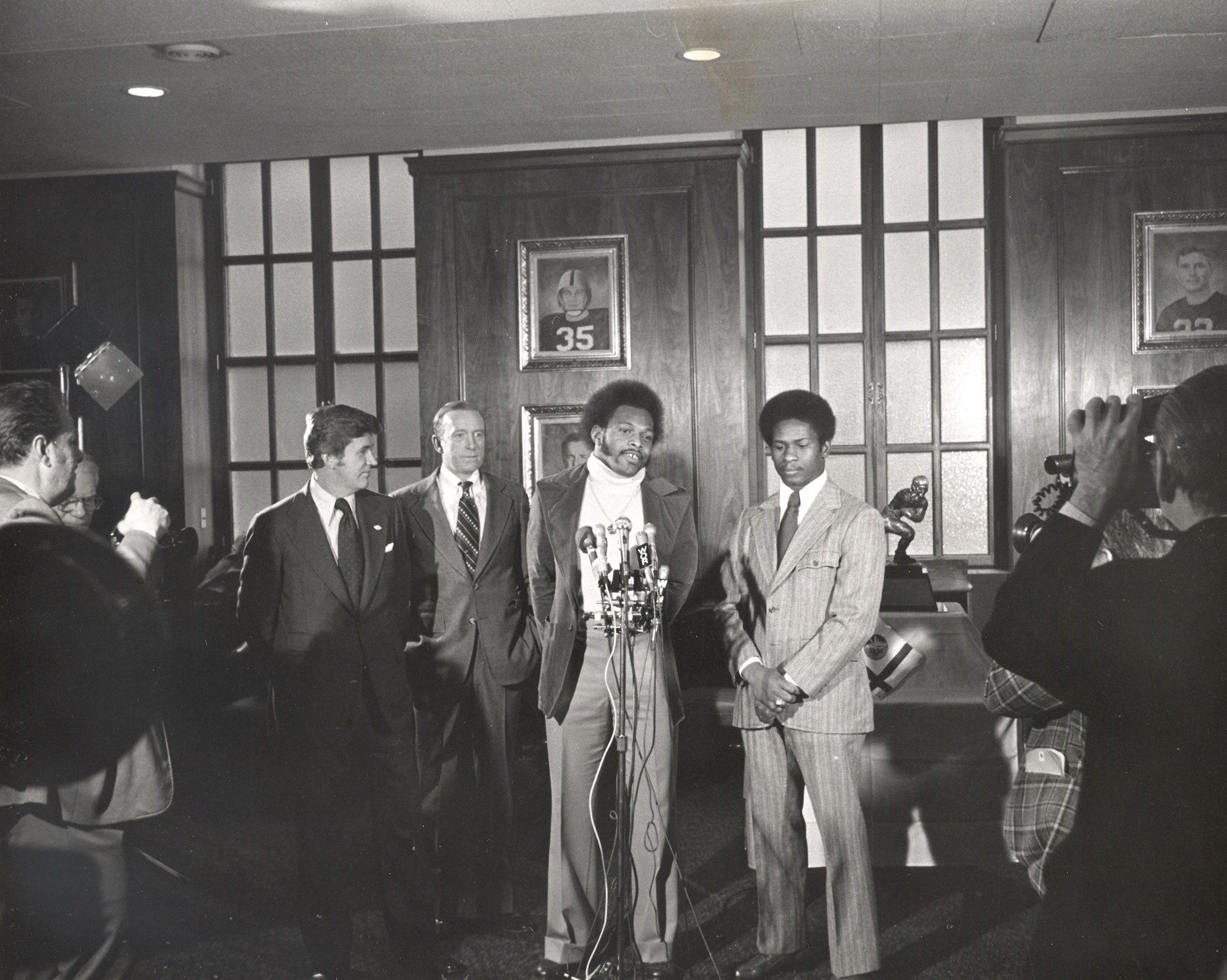