Ameche won Wisconsin’s first Heisman with a tough, physical style that earned him the nickname “The Iron Horse.” He’s one of two fullbacks to win the Heisman.

Born in Italy, Ameche grew up in Kenosha, Wisc., where he was an all-state fullback at Bradford High. He changed his name from Lino to Alan when he was 16. In 1950, his team went undefeated and he scored 108 points. He also placed at state finals and set city records for running track (the 100 and relays) and throwing shot put. Ameche earned six letters between the two sports.

During his college recruitment, he was being heavily pressured to attend Notre Dame by Fred Miller, the philanthropic owner of Milwaukee’s Miller Brewing Co. Wisconsin partisans, however, threatened a boycott against the buying and consumption of Miller beer if Ameche attended Notre Dame. Under threat of boycott, Miller backed off and Ameche signed with Wisconsin.

Because of the Korean War, freshman were eligible, which meant that Ameche played right away in 1951. He broke the Wisconsin single-season rushing record with 774 yards and was named to the All-Big-Ten team. In 1952, he broke his own mark, rushing for 946 yards as the Badgers made it to the Rose Bowl. He rushed for 133 yards in the 7-0 loss to USC.

In 1953, when rule changes made it necessary for him to be an all-purpose player, Ameche played defense with such ferocity that he ended up playing 55 minutes or more in each game, prompting his nickname. He finished sixth in the Heisman vote as a junior.

Ameche earned All-American honors for the third time as a senior, rushing for 641 yards and nine touchdowns while again playing both ways. He finished his career as the NCAA’s all-time leading rusher with 3,345 yards and was awarded the Heisman Trophy over Kurt Burris of Oklahoma and Howard Cassady of Ohio State.

Drafted by Baltimore, Ameche eventually turned down a lucrative offer to join the pro wrestling tour and signed with the Colts. He led the NFL in rushing his first season and was named Rookie of the Year. He played as a fullback with the Colts for six seasons (1955-1960), then founded Gino’s, Inc. and served as its Corporate Secretary and a member of the Board.

Ameche was awarded a Doctor of Humane Letters from St. Joseph’s College; was Director of the Philadelphia Orchestra; Director of the Multiple Sclerosis Society; a Trustee of Malvern Prep; and was Corporations Chairman for the United Negro College Fund. He passed away on August 8th, 1988.

Ameche was elected to the National Football Foundation and College Hall of Fame in 1975.

(**) Injured after seven snaps. Did not return 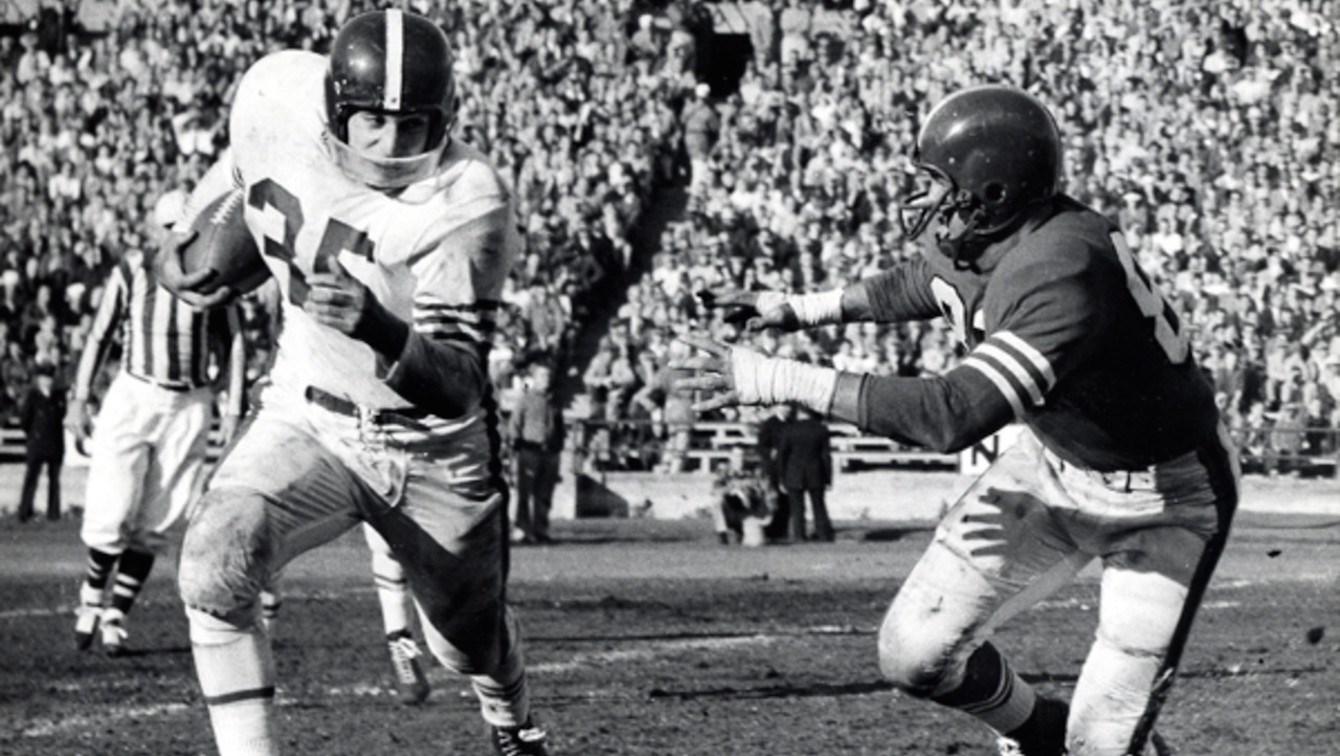 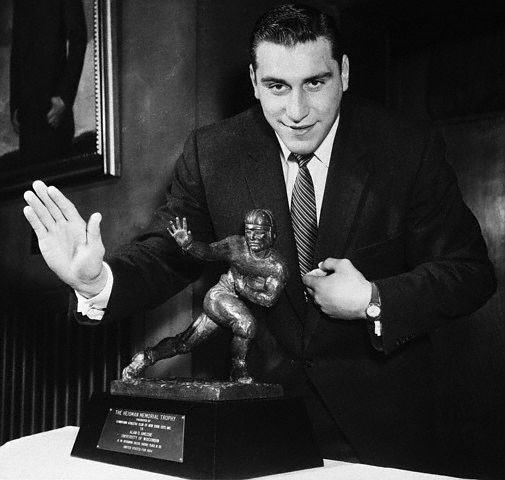 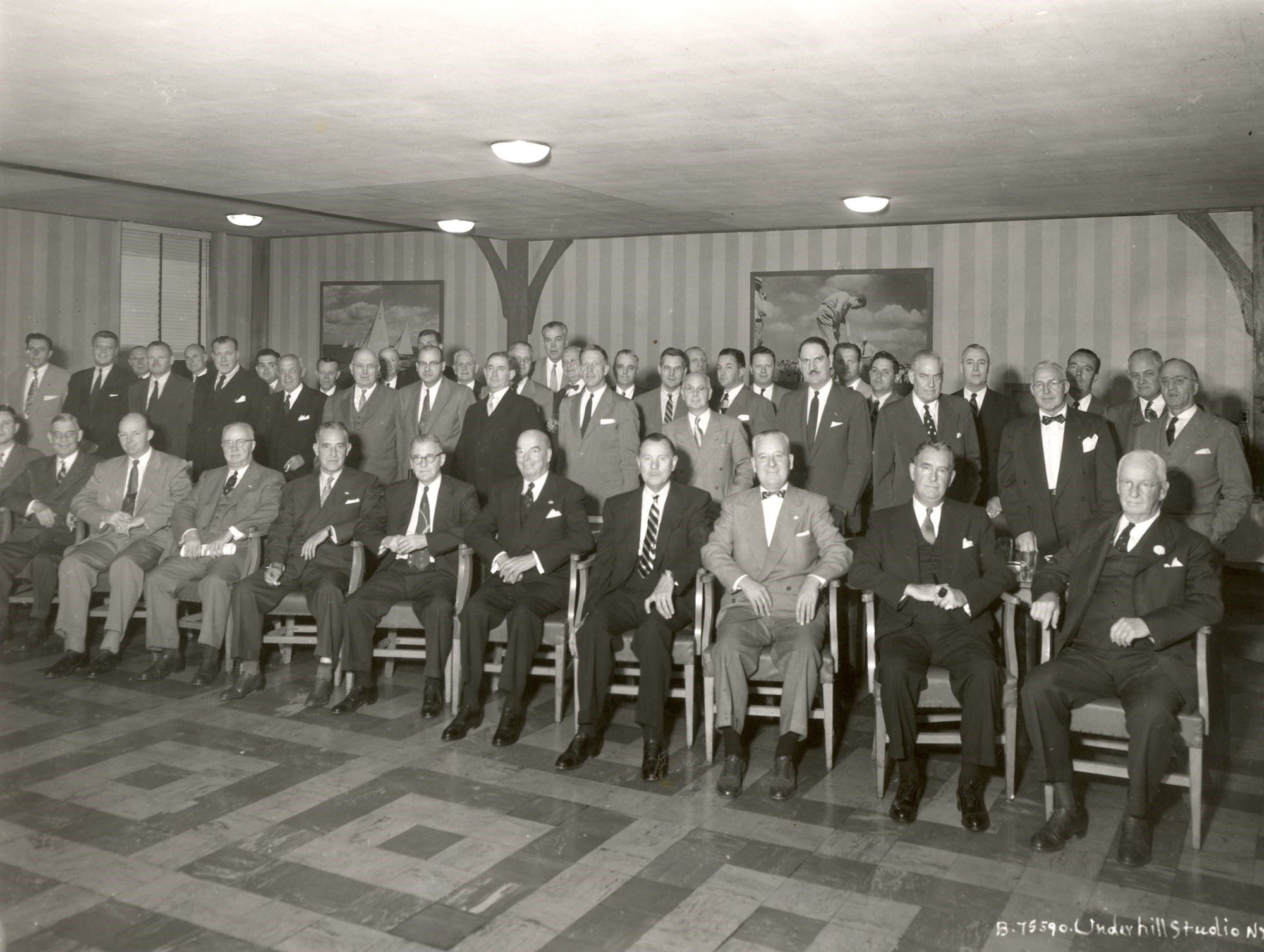