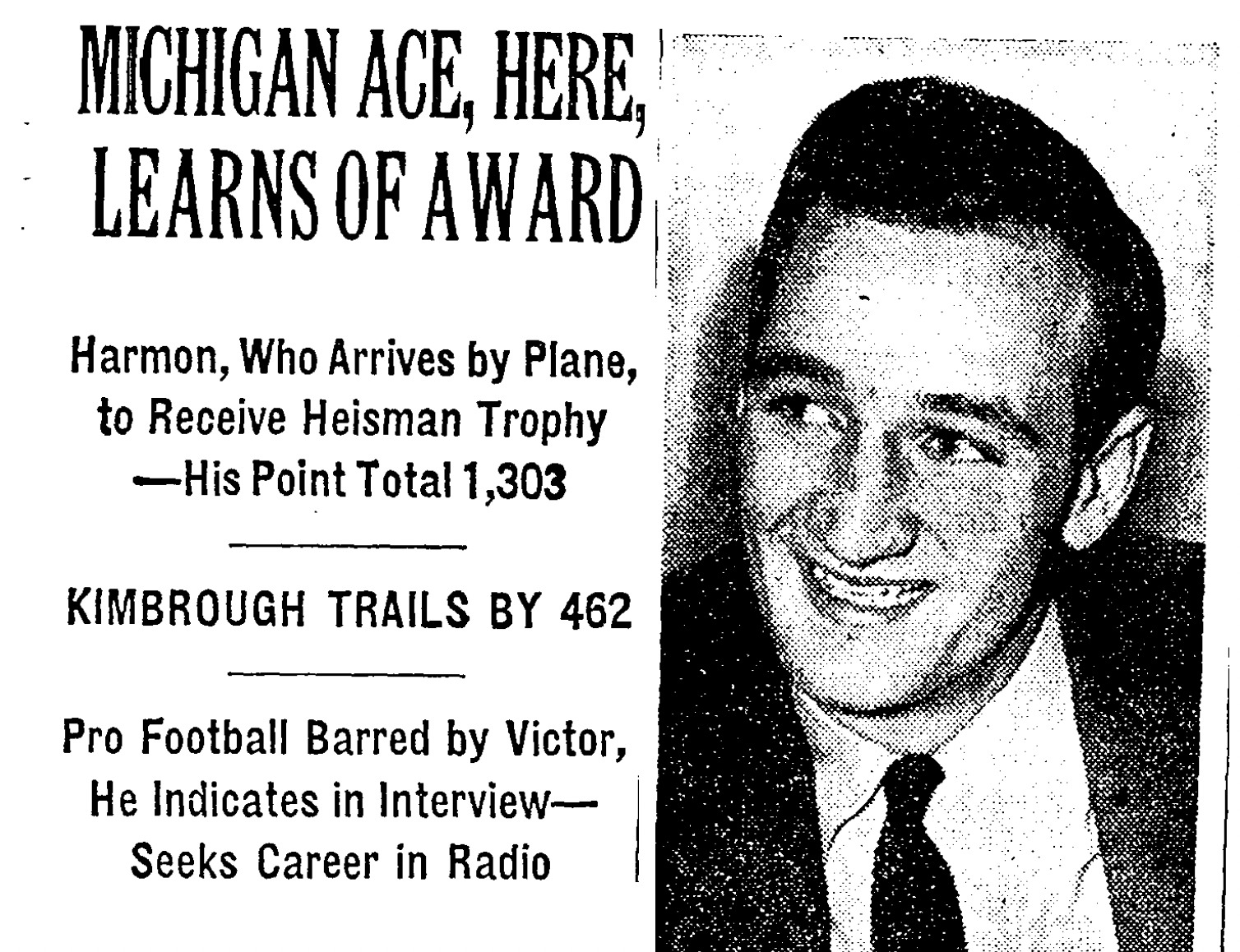 The New York Times headline following the announcement of Tom Harmon as the 1940 Heisman winner.

Not until 1977 was the announcement made on the same date as the trophy given, when Texas’ Earl Campbell was announced as the winner at the end of an hour-long special that also featured six other position winners given Downtown Athletic Club trophies.

Berwanger was on hand to give Campbell the bronze statue, appearing along side a host of other celebrities and athletes during the broadcast including Farrah Fawcett and Reggie Jackson.

Five years later in 1982, finalists began being formally invited in a format familiar to today’s ceremony.

But in the first few decades of the award, telegrams and phone calls served as the communication conduits. The newspaper-reported reactions of the winners and the descriptions themselves serve as a time capsule of an award that was not nearly as eponymous as it is today.

Davey O’Brien was the fourth Heisman winner on Nov. 28, 1938, the first of five straight years the award was announced on that day.

A year later, Iowa’s Nile Kinnick was announced as winner.

Per the New York Times the next day: “Nile Clarke Kinnick Jr., the Cornbelt Comet who made Iowa’s golden number 24 blaze brilliantly before the national football public, was yesterday acclaimed the nation’s outstanding player of 1939.

“America’s sports writers and broadcasters voted Kinnick, a durable, triple-threat halfback who starred through over 400 minutes in seven major games, the John W. Heisman memorial trophy, awarded each year by the Downtown Athletic Club of New York City to the outstanding college football player in the United States.

“Kinnick, who has heaved 11 passes for touchdowns, scored six touchdowns, drop-kicked 11 points after touchdown and maintained a brilliant punting average, was announced as winner yesterday by Chairman Willard B. Prince of the Heisman Trophy committee.”

Michigan’s Tom Harmon was announced as the winner as the 1940 Heisman Trophy winner. Below is how the New York Times described his achievement, not to mention his burgeoning radio career.

“Tom Harmon, toast of the football world as a result of the feats he performed for Michigan, flew in from the Middle West yesterday, arriving here just in time to learn something he probably surmised all the time.

“Coincidental with his arrival at La Guardia Field to fulfill a radio engagement with Eddie Cantor came the announcement from Chairman Bill Prince of the Heisman Memorial Trophy committee to the effect that he, Thomas Dudley Harmon, had won the award given by the Downtown A. C. of New York City each year to the outstanding college player of the year.

“Big-boned and alert-eyed, Harmon has a sharp nose that should have been pie for a straight-arm but wasn’t and a jaw so prominent that it ought to have made him a sucker’ for a swinging left, but apparently! didn’t or hasn’t.”

A star was born, indeed.

“Running, passing and kicking with deadly effect from the deep position in Princeton’s single-wing, the 21-year-old, 171-pound senior from Maumee, Ohio, established himself as the total-offense leader of the nation in pacing the Tigers to their second straight Eastern and Ivy League fifth consecutive Big Three titles.”

Newspaper reporters soon found Heisman winners on campus not long after the players’ themselves had learned of their new honor.

Per this 1956 newspaper report in the New York Times after Notre Dame’s Paul Hornung – the only Heisman winner on a losing team —  was announced as the winner.

“A surprised Notre Dame football star, Paul Hornung, yesterday was named the winner of the John W. Heisman Memorial Trophy – the nation’s top gridiron award. The Downtown Athletic Club made the announcement and it caught the Irish backfield hero off balance.

“ ‘I couldn’t believe it when they told me I’d won it,” the 205-pound, 6-foot 2-inch athlete said between classes yesterday at Notre Dame. ‘I did not think I was even up for consideration.’ ”

When Army great Pete Dawkins learned of his Heisman award in 1958, Associated Press led with the word “Flabbergasted”, continuing:

“That was the comment today of the first captain and brigade commander of the Corps of Cadets, the president of the first (senior) class, and the captain of the Army football team on the selection of Pete Dawkins as winner of the Heisman Trophy as the outstanding college football player of 1958.

“Just in case you think they stifle individual expression at the Academy, the comment was made by one man who holds all of those honors on the Plains – Pete Dawkins. He also sings and will travel.

“He wants to join the Air Force when commissioned in June.

“ ‘Flabbergasted’ was Pete Dawkins but no one else at this gray fortress on the Hudson where the cheers still echo from Army’s great undefeated season and resounding victory over Navy.”

In 1962, Oregon State quarterback Terry Baker was reportedly cool as a cucumber upon learning of his Heisman win.

The New York Times wrote: “In Corvallis, Baker’s first reaction when told he had won the Heisman Trophy was: ‘No kidding? That’s great. I’m a very lucky boy.’ Then he said: ‘I’ve got to get back to class.’ “

“That was typical. The possessor of a B-plus average with a heavy schedule, Terry missed one or more practice sessions a week through the football season because of late laboratory classes. But with or without benefit of practice, Baker missed few chances to keep Oregon State’s attack rolling.”

“At South Bend, Huarte received the news with customary modesty, expressing appreciation and giving his teammates credit. ‘I was lucky, I had good receivers, great blocking and a great effort from everybody.’ “After classes he reported promptly for practice at which point (Coach Are) Parseghian stressed the importance of Saturday’s final game at Los Angeles against Southern California.

“ ‘They almost operated on him,’ recalled the coach yesterday, ‘but fortunately they didn’t and his shoulder came around all right. Without Huarte we would have been a three yards and a cloud of dust type of team. We built our whole offense around him and I’ve lived in constant dread of what we would do if something happened to him.”

The 1966 Heisman announcement on Nov. 22 was the earliest in the award’s history. By that year, the media coverage and chatter was enough that a young quarterback from Florida named Steve Spurrier wasn’t exactly caught off guard.

Quoted in a local Gainesville outlet, Spurrier said: “‘My first reaction was one of joy. From reading the newspapers I knew I had a slim lead, and this took some of the shock out of the formal announcement. I knew all along I had a pretty good chance.’ ”

You can almost see Spurrier’s patented smirk when he said it.