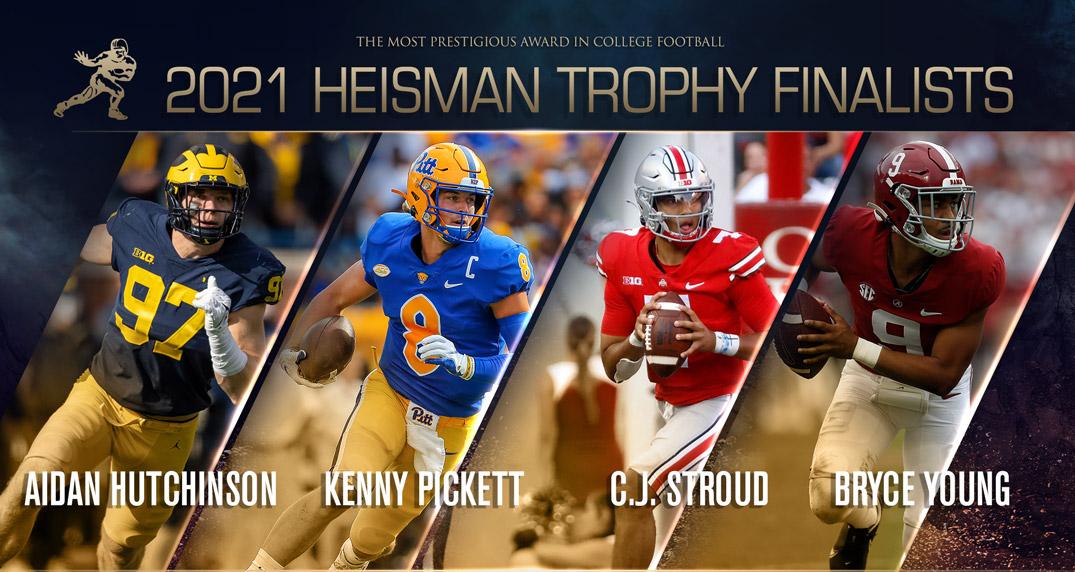 The 2021 Heisman Trophy winner will be announced during the televised Heisman Trophy Ceremony Presented by Nissan that will air Saturday (Dec. 11) at 8 p.m. ET on ESPN.

The Top 10 finishers will be featured on The Top 10 Heisman Trophy Finalists Show Presented by Nissan on Thursday (Dec. 9) at 9 p.m. ET on ESPN.

Hutchinson is Michigan’s sixth finalist and the first since fellow Wolverine defensive standout Jabrill Peppers in 2016. He is the second Heisman finalist to play on the defensive side in three years, following Ohio State’s Chase Young in 2019.

Pickett is Pittsburgh’s third finalist and its first since Larry Fitzgerald in 2003. The other was Craig Heyward in 1987.

Stroud is Ohio State’s eighth Heisman finalist and its first since Justin Fields and Young were co-finalists in 2019. Including Dwayne Haskins in 2018, Stroud is the third consecutive Buckeye starting quarterback to become a Heisman finalist.

Young is Alabama’s 11th Heisman finalist (and the ninth since 2009), tying Oklahoma for the most of any school. Young’s former Crimson Tide teammates DeVonta Smith (the 2020 Heisman Trophy winner) and Mac Jones were finalists last year.

(More notes on the 2021 Heisman finalists)

Hutchinson, a senior defensive end and two-time Michigan team captain, was named the 2021 Woodson-Nagurski Big Ten Defensive Player of the Year and the Smith-Brown Big Ten Defensive Lineman of the Year while earning consensus Big Ten first-team honors. He set Michigan’s single-season sack record with 14, including three against Ohio State in the regular-season finale, while also posting 15 quarterback hurries in that game (as measured by Pro Football Focus College), the most in a single game since the stat has been measured. His 14 sacks are third-most nationally and he has 15.5 tackles for loss.

Pickett, a redshirt senior and fourth-year starter, is the ACC’s Overall and Offensive Player of the Year and led the Panthers to the 2021 ACC Championship (its first in school history) and a berth in the Chick-fil-A Peach Bowl. His 4,319 passing yards, 334 completions and 42 touchdown passes are school records while he threw just seven interceptions with a completion percentage of 67.2, leading Pitt to an 11-2 season. He also scored four touchdowns on the ground. Pickett passed for over 400 yards three times, including 419 yards in a win over Miami (Fla.). His 42 TD passes are third-most nationally, his 4,319 passing yards and 350.8 yards per game of total offense are fifth-best and his 333.2 yards per game passing are seventh-best. Pickett stands as the Panthers’ all-time leader in passing yards (12,303), pass completions (1,045), total offense (13,112 yards) and career touchdown passes (81). His 20 rushing TDs are the most of any Pitt quarterback.

Stroud, a redshirt freshman quarterback and first-year starter, completed 280 of 395 passes for 3,862 yards with 38 touchdowns and just five interceptions, leading the Buckeyes to a 10-2 record. His 182.2 quarterback rating is second-best nationally, his 351.1 passing yards per game are fourth-best, his 38 TDs are fifth-best and his 70.9 completion percentage is sixth-best. The Buckeye offense he directs was No. 1 nationally in total offense (551.4 yards per game) and scoring offense (45.5) and No. 5 in passing offense (364.9). His current quarterback rating (182.2), completion percentage (70.9) and passing yards per game (351.1) are first in Ohio State’s season rankings while his 3,862 passing yards rank second in school history and his 38 touchdown passes rank third.

Young, a sophomore and first-year starter, threw for 4,322 yards on 314-of-462 passing (68.0%) with 43 touchdowns and just four interceptions, leading Alabama to a 12-1 record, an 2021 SEC championship and the top seed in the College Football Playoff. His touchdowns are second-most nationally, his passing yards are fourth-most and his quarterback rating of 175.53 is fifth-best. His passing yards per game (332.5) and completions (314) are sixth-most. Young, who also ran for three touchdowns, threw for five TDs in a game three times, including against Arkansas when he also set the Alabama school record with 559 passing yards, breaking a mark that stood for 52 years. He also set SEC Championship records with 421 passing yards and 461 yards of total offense, earning game MVP honors.

If Hutchinson were to win the Heisman, he would be Michigan’s fourth winner following Charles Woodson (1997), Desmond Howard (1991) and Tom Harmon (1940).

Pickett would be Pittsburgh’s second winner following Tony Dorsett in 1976.

If Stroud were to win, he would be Ohio State’s eighth Heisman winner and its first since Troy Smith in 2006.

If Young were to win the award, he would give Alabama back-to-back Heisman winners following Smith in 2020. It would also mark the second time in five years a school produced back-to-back winners, following Oklahoma’s Baker Mayfield (2017) and Kyler Murray (2018).

There have now been 167 players invited to New York as Heisman finalists since the practice was first instituted in 1982 (including the four last year that appeared virtually).

The 2021 Heisman Trophy ballots went out to 928 electors, which includes 870 members of the media, our 57 living Heisman winners and one overall fan vote presented by Nissan, premier partner of the Heisman Trophy. All ballots were submitted electronically to the independent accountants at Deloitte.