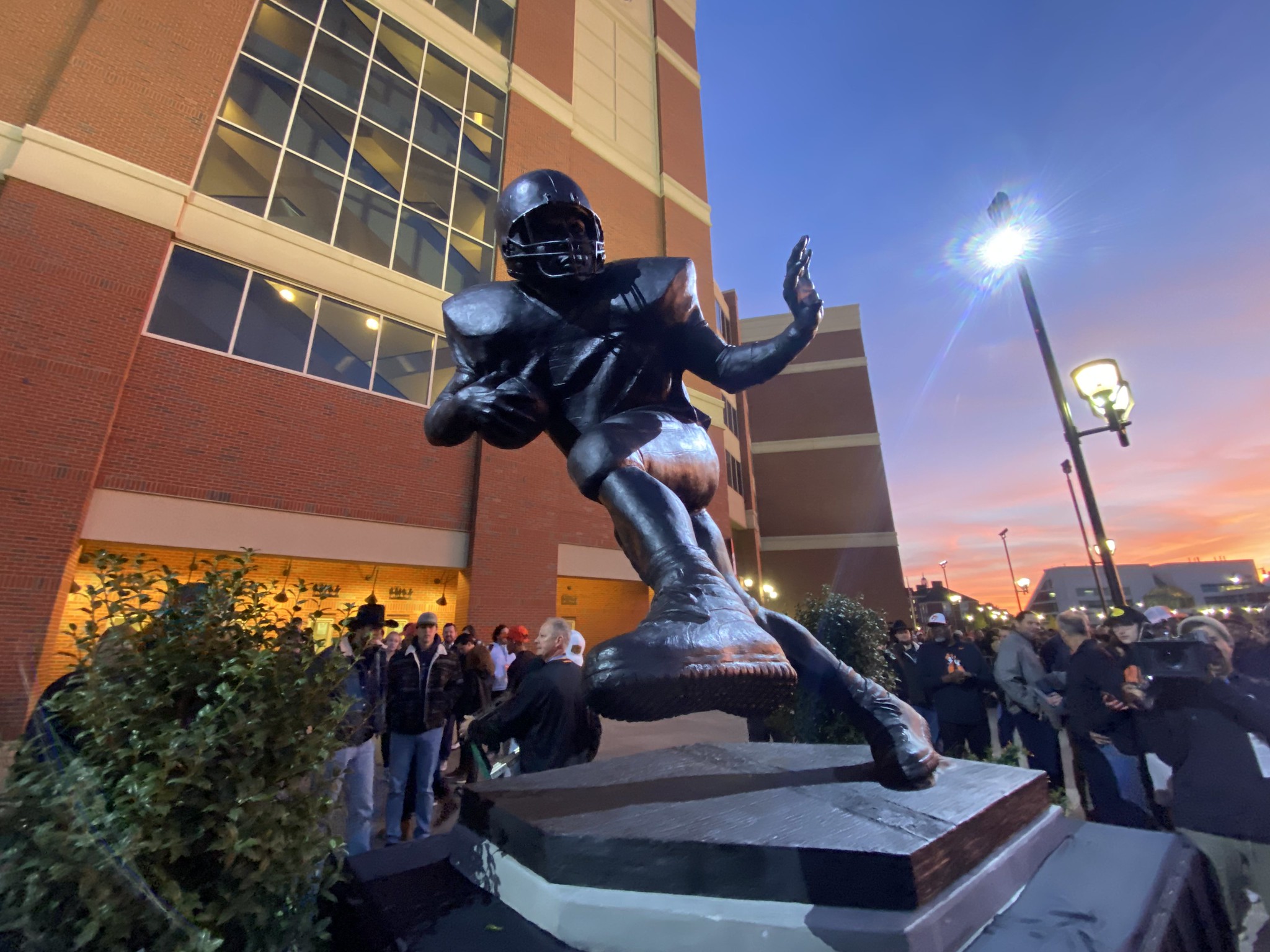 It was a big weekend for the Heisman Fraternity with winners achieving a variety of amazing milestones and receiving impressive honors.

1988 Heisman winner Barry Sanders was immortalized Saturday outside Oklahoma State’s Boone Pickens Stadium with the unveiling of a nine-foot statue celebrating the running back’s place in the hearts of all Cowboys fans.

The first statue of an athlete on the campus, it was unveiled in front of thousands outside the stadium before Oklahoma State’s game against TCU.

Then, during the game, Sanders and his No. 21 debuted as part of OSU football’s Ring of Honor, joining fellow running back Thurman Thomas as the only players in it so far.

Sanders ran for over 3,500 yards at Oklahoma State, including 2,628 in his Heisman-winning season.

Also on Saturday, 2016 Heisman winner Lamar Jackson had his No. 8 jersey retired at Louisville in a halftime ceremony.

Jackson, who threw for 9,043 yards in three seasons at Louisville with 69 TDs and 4,132 rushing yards and 50 more scores on the ground, told the Louisville crowd: “I appreciate you guys so much, you’re with me every step of the way. I wouldn’t have wanted to go to any other school. This is the best fan base in the nation.”

On Sunday, 1997 winner Charles Woodson was honored ahead of the Las Vegas Raiders’ home game in a pre-game ceremony where the NFL cornerback great received his Pro Football Hall of Fame ring.

Said Woodson to the Raiders fans: “You guys have stuck with me through thick and thin. From a young player who was … out there doing my own thing to when I came back for a second time. One thing I didn’t imagine was how you guys would receive me when I came back, but man. I told you that night, my last game at the Coliseum, that you guys welcomed me back with open arms and I’ll always appreciate that and I’ll never forget that moment.”

The most recent addition to the Heisman family, 2020 winner DeVonta Smith, celebrated his first birthday (on Sunday) as a Heisman winner and as an NFL receiver in a big way, catching two TD passes among four grabs for 66 yards to help Philadelphia secure a road win at Denver.

The most veteran Heisman winner in the NFL, 2009 recipient Mark Ingram, joined a special place in Heisman and NFL history.

Recently back with the New Orleans, he became the Saints all-time rushing leader Sunday. He had 47 yards on the day to give him 6,124 career yards with the franchise. He passed Deuce McAllister’s franchise mark of 6,096 yards, which stood since 2008.

He joins Sanders (15,269 with the Lions), Eddie George (10,009 with the Titans/Oilers) and Marcus Allen (8,545 with the Raiders) as Heisman winners who sit atop NFL franchise rushing career lists.

Cam Newton, who followed Ingram as a Heisman winner, saw his brief NFL respite come to an end this week with his return to the Carolina Panthers.

Playing as a reserve, he first ran for a two-yard TD and then threw for a 2-yard TD, both in the first-quarter of the Panthers’ win.

One of Newton’s Auburn Heisman predecessor, Pat Sullivan – who died almost two years ago – was honored Saturday for the 50th anniversary of his Heisman-winning season at Jordan-Hare Stadium.

Sullivan’s memory, honored along with his 1971 teammates, were celebrated during the Tigers’ game.