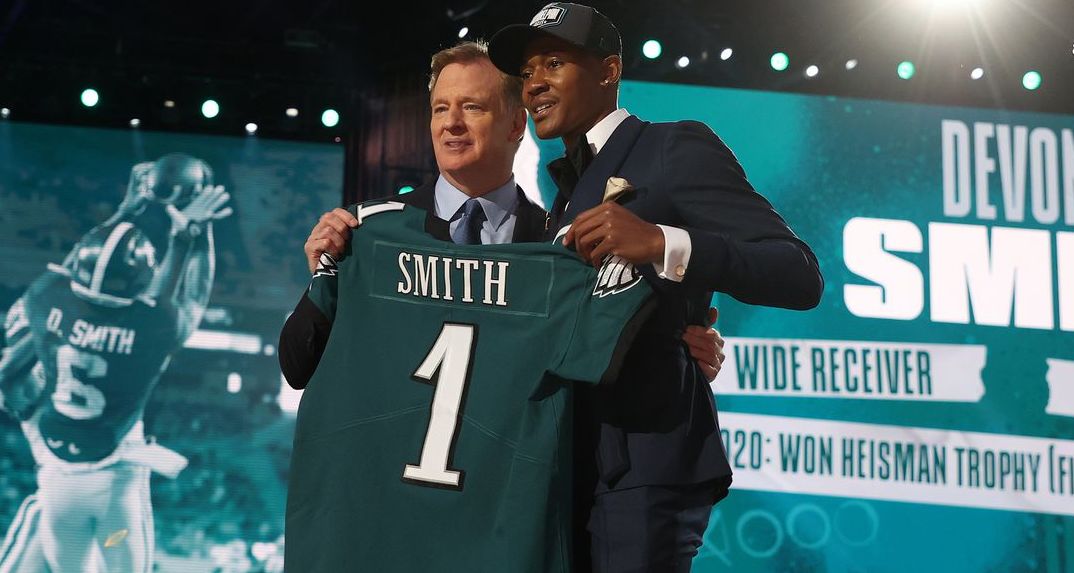 DeVonta Smith was drafted 10th overall in the 2021 NFL Draft by the Philadelphia Eagles.

Alabama wide receiver DeVonta Smith, the 2020 Heisman Trophy winner coming off arguably the most decorated and accomplished season ever among NCAA wide receivers, was drafted 10th in the first round by the Philadelphia Eagles during the 2021 NFL Draft on Thursday in Cleveland.

Three years earlier, in the first NFL Draft in 1936, the Eagles used the first pick of the draft on the first Heisman Trophy winner, Jay Berwanger.

Smith, as the fourth Heisman-winning wide receiver, joins his contemporaries as a first-round pick. Johnny Rodgers was taken 25th by the San Diego Chargers in 1973, Tim Brown went sixth to the Los Angeles Raiders in 1988 and Desmond Howard was drafted fourth overall by Washington in 1992.

The last Heisman winner to play some receiver, Charles Woodson, also was drafted fourth overall. The Oakland Raiders selected him in 1998.

Smith is the highest drafted among Alabama’s three Heisman Trophy winners, following running back Mark Ingram going 28th overall to the New Orleans Saints in 2011 and running back Derrick Henry, drafted 45th overall in the second round by the Tennessee Titans in 2016.

Smith helped lead Alabama to the 2020 national championship after a dominant season. In 11 games (including the SEC championship), Smith led the country with 98 receptions and 1,511 receiving yards – the most by any Heisman winner in either category, topping the previous record holder, Howard (950 receiving yards on 61 receptions in 1991).

Smith, the SEC Offensive Player of the Year and the CFP Offensive Player of the Game, became the first wide receiver to win a Heisman and a national title in the same season and the seventh player to win both while leading his team to an undefeated season. He’s also the 17th player to win a Heisman and a national crown.
Combining the SEC title game, the CFP semifinal and the national championship, Smith totaled for 34 receptions, 529 yards (176.33 per game) and 8 TDs.