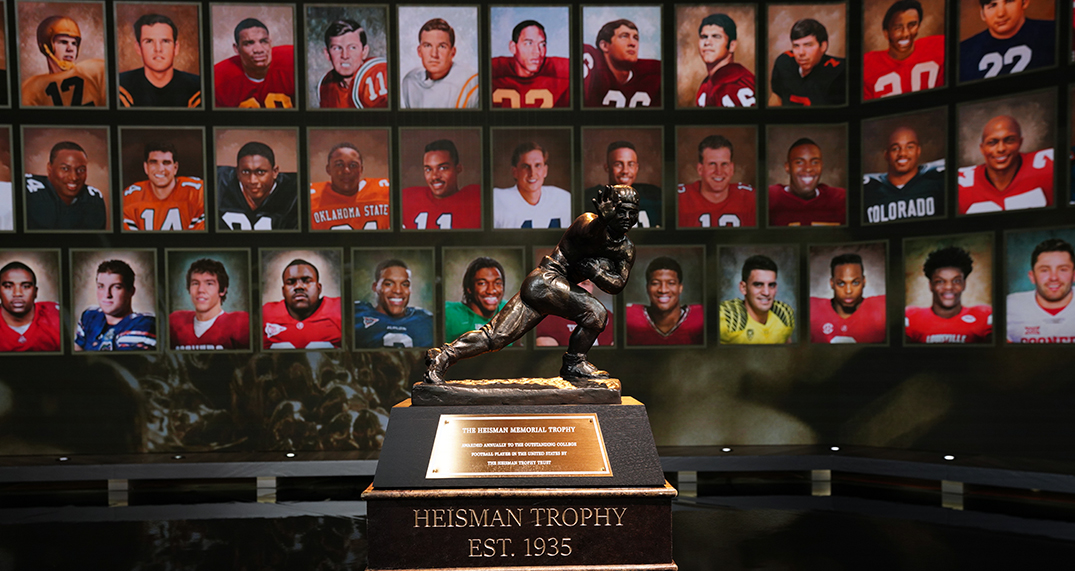 Heading into Halloween weekend, the college football landscape and the Heisman race continues to be an exciting one to navigate, twists and turns coming every week.

Corral has thrown for 1,913 yards and 15 scores while running for another 474 yards and 9 more TDs while Young has thrown for 2,453 yards and 26 TDs. The latter is coming off a season-best 371 yards passing, a season-high 42 yards rushing and a combined four TDs in a win over Tennessee.

But Finebaum is holding Georgia DL Jordan Davis in special regard, saying: “Jordan Davis. Who is he? He’s the head of the best defensive line I’ve ever seen at the University of Georgia. Will he win it? Probably not. He’s the best player. He represents that defensive line and I think he deserves a lot of consideration, because it’s long overdue.”

Walker III, who has led the Spartans to a 7-0 start with a meeting with 7-0 Michigan this weekend, leads the country with 142.4 rushing yards per game and has 997 yards on the ground with nine touchdowns. Walker’s counterpart at Michigan, RB Blake Corum, can make a case for Heisman love, too, with 729 yards and 10 TDs. Mordecai has thrown for 2,320 yards with 29 TDs, leading the Mustangs to a 7-0 start.

Fansided listed Ohio State RB Treveyon Henderson fifth in its poll, citing his 8.8 yards per carry average and 14 total touchdowns. It has Corral fourth, Pickett third, Young second and Stroud first. Stroud now has 22 TDs and 1,965 yards passing while Pickett, coming off leading the Panthers to a decisive win over Clemson, has passed for 2,236 yards and 23 TDs with just one interception.

Pitt’s twitter feed noted this Heisman-esque stat for Pickett after he threw for over 300 yards vs. the Tigers in a double digit win.

USA Today’s Charles LeClaire labeled Young and Corral candidates “1A and 1B” with Pickett not far behind in his latest analysis. He had Stroud fourth and Texas RB Bijan Robinson fifth, noting his 930 yards and 10 TDs with 14 more receptions and another three scores.

Like many here, The Athletic’s Week 8 straw poll has Young and Corral at 1-2. Pickett and Davis are 3-4 while Walker III and Stroud are 5-6.

It also listed Henderson, Robinson, UVA QB Brennan Armstrong and Wake Forest QB Sam Hartman on its Heisman radar. Armstrong has already eclipsed 3,000 yards in passing with 23 TDs while Hartman has Wake 7-0 with 2,073 yards and 19 TDs.

Among other Heisman dark horses is USC WR Drake London, who caught 15 passes in a loss at Notre Dame last week and leads all power 5 schools with 79 receptions, averaging 143 receiving yards per game. The San Jose Mercury News broke down his and Thibodeaux’s Heisman chances. Thibodeaux has 7.5 tackles for loss in just 5 games.

Speaking of dark horse candidates (and we were), this tongue-in-cheek Heisman tweet from ESPN’s Kyle Bonagura highlights some impressive work by San Diego State kicker Matt Araiza. Araiza had a punt for over 80 yards last week while also kicking a 51-yard field goal. CBS’s Aaron Taylor nicknamed the kicker Quadzilla.

Eddie George, in his first year as the Tennessee State head coach, has the Tigers over .500 for the first time after leading them to their third straight win, a 28-0 shutout over Eastern Illinois.