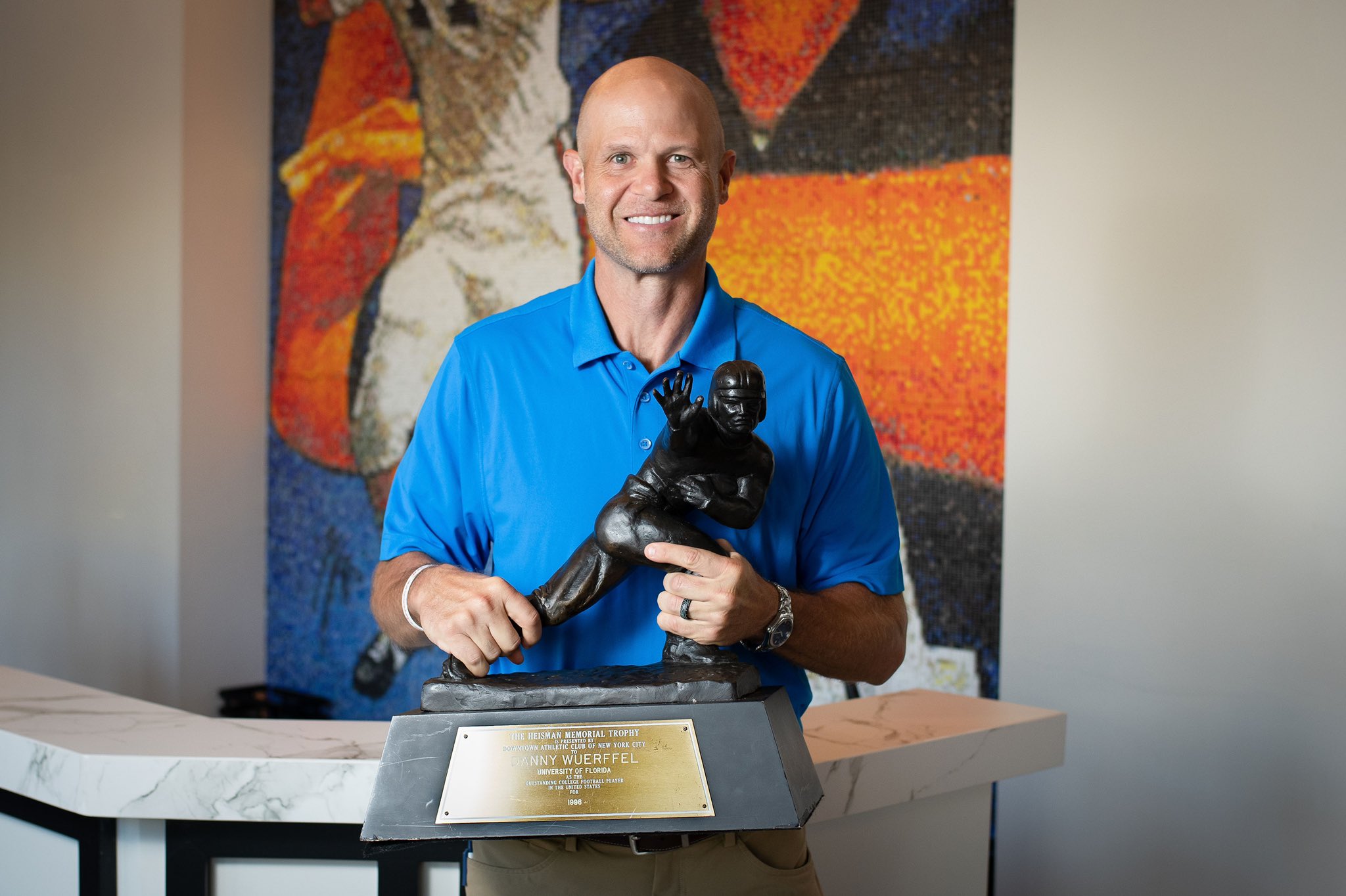 Danny Wuerffel on the 25th anniversary of his 1996 Heisman Trophy win.

A quirk of fate, a lucky assignment, a little of both?

Florida star Danny Wuerffel – the son of an Air Force chaplain – won the 1996 Heisman Trophy a quarter of a century ago. But had the military not assigned his father to the Sunshine State as Wuerffel was entering high school, we might be celebrating someone else’s 25-year Heisman Trophy anniversary.

Perhaps it was destiny that landed Wuerffel in Florida, allowing him to blossom into a prep phenom, a college star, and ultimately sending him in his father’s footsteps of service, albeit via a different path.

While we celebrate the 25th anniversary of his 1996 Heisman, it gives us a chance to also spotlight how Wuerffel has partnered with community-based folks in Florida to develop and lend his name to the Wuerffel Trophy, given annually to the college football player “who best combines exemplary community service with athletic and academic achievement.”

Wuerffel was born in Pensacola, Fla., but he didn’t grow up there. His father, Jon, was a Lutheran minister and a chaplain in the Air Force and in typical military fashion, the family did its share of globe trotting. They lived in South Carolina, Spain, Nebraska and Colorado before a move to Fort Walton Beach, Fla., in the early 1990s.

As the family has said, it was sheer luck that sent it to Florida and not back to Europe or just about anywhere else at that time.

Fort Walton Beach High became the first beneficiary of the Air Force’s decision to move Wuerffel’s father to Florida as he became a two-sport star in football and basketball at the school.

As a senior, he led his Vikings to a Florida Class 4 A state football title with an undefeated season, drawing scholarship offers from across the country before he settled on the University of Florida under the Gators’ first Heisman winner, Steve Spurrier.

Wuerffel became a full-time starter as a 1995 junior and leaped into the national spotlight, leading the Gators to a 12-1 season, an SEC title and a spot in the Fiesta Bowl where No. 2 Florida fell to national champion Nebraska. He threw for 3,266 yards and 35 TDs and finished a strong third in the Heisman vote behind 1995 winner Eddie George and Tommie Frazier.

By the time 1996 rolled around, he was among a list of Heisman favorites and did not shrink from the spotlight.

Florida opened the season with blowout wins over Southwest Louisiana and Georgia Southern before the Gators’ first test of the season, a Sept. 21 date at No. 2 Tennessee.

Wuerffel and No. 4 Florida passed it just fine as the Gators – behind four of the QB’s TD throws – raced to a 35-0 lead early in the second quarter before easing on the gas, eventually winning 35-29 in front of the biggest recorded college football crowd (107,608) in 66 years.

In fact, Florida was so good in 1996, that Wuerffel completed just three of the Gators’ first 10 games and played little more than a half in six of them.

The game against lowly Vanderbilt on Nov. 9 was surprisingly not one of them as Florida got out to a 28-6 lead but saw the Commodores score 15 straight points to make it close. Florida was held well below its offensive averages, but Wuerffel still accounted for all four scores via his arm.

It was back to blowouts with a 52-25 win over South Carolina in week 10 as Florida finished 8-0 in SEC play for the second year in a row. 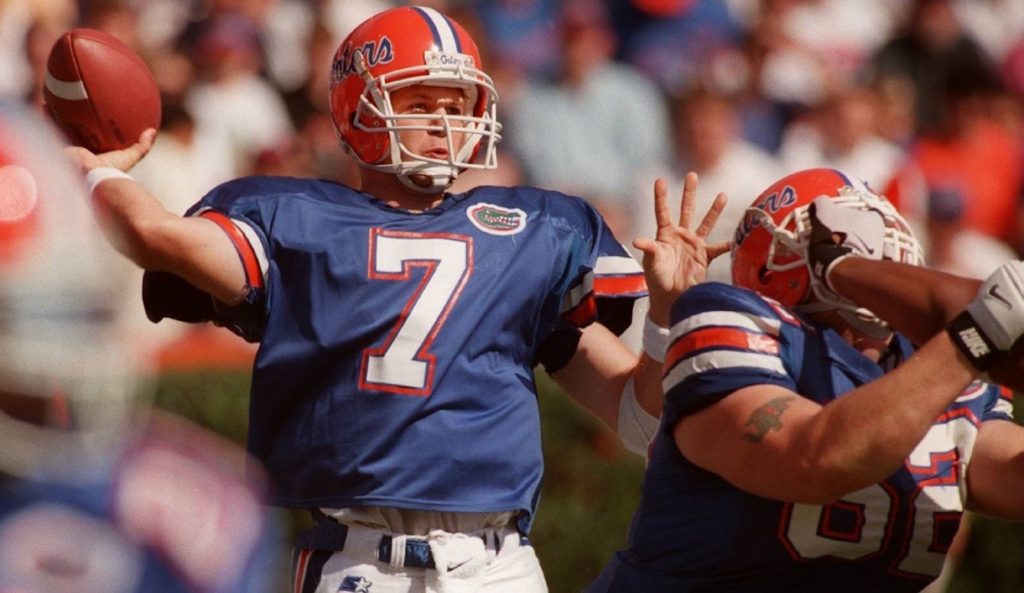 A week later, however, top-ranked Florida suffered its only setback of the season, a 24-21 loss to No. 2 Florida State in the only No. 1 vs. No. 2 matchup in the series. Wuerffel passed for 362 yards and three scores, but also tossed three interceptions as the Gators fell behind 17-0 and could not recover. It was only Wuerffel’s third loss as a starter.

Florida, however, would get another crack at Florida State on an even bigger stage, but not before Wuerffel made history.

The Gators bounced back from the loss to the Seminoles with a 45-30 win over No. 11 Alabama to win their fourth straight SEC title, Wuerffel throwing for 401 yards on 20-of-35 passing with six TDs and two interceptions.

Wuerffel’s performance solidified his standing in the Heisman race and one week later, he became Florida’s second winner of the trophy with 1,363 points, well ahead of Iowa State’s Troy Davis (1,174) thanks to 300 first-place votes. He captured the Heisman 30 years after Spurrier.

Thanks to a Nebraska loss to Texas, Florida climbed into a rematch with Florida State in the Sugar Bowl less than three waker later. And thanks to No. 2 Arizona State falling to Ohio State in the Fiesta Bowl, the Gator-Seminole sequel was the de facto national title game.

A close content early in the second half turned into another blowout as No. 3 Florida trounced No. 1 Florida State, 52-20. Wuerffel threw for 306 yards and three TDs while running for another score, leading the Gators to the program’s first ever national title.

Wuerffel finished his Gator career as the most decorated player in program history. He threw for 10,875 yards and 114 touchdown passes, the best in SEC history and second-most in major college history at the time, graduating with a bachelor’s degree in public relations.

In addition to the Heisman Trophy, he was also the recipient of the 1996 Campbell Award, the Maxwell Award, the Johnny Unitas Award and the Walter Camp Player of the Year Award.

The following spring, Wuerffel was drafted in the fourth round of the 1997 NFL draft (99th overall) by the New Orleans Saints. He spent six years in the NFL with the Saints, Packers, Bears and Redskins before retiring.

But the end of his NFL career beget the start of a new mission.

Wuerffel had begun work with the New Orleans-based Desire Street Ministries — a non-profit, faith-based, organization focused on spiritual and community development that served under-resourced neighborhoods — during his time with the Saints.

Wuerffel felt such a connection to the work done by Desire Street Ministries that he became its executive director following his NFL career and the organization’s reach now extends throughout the Southeast.

The Wuerffel Trophy, working in conjunction with the All Sports Association based in Fort Walton, was developed “to inspire other people to be community-minded, to live for others, to sacrifice their own interests for the benefit of the community and other people.”

First given in 2005, it has become the premier NCAA football award based on community service.

Wuerffel is a member of the College Football Hall of Fame, the CoSIDA Academic All-America Hall of Fame and has earned numerous other service-based honors. He continues to serve as an exemplary figure for student-athletes who try to balance athletic, academic and community success.