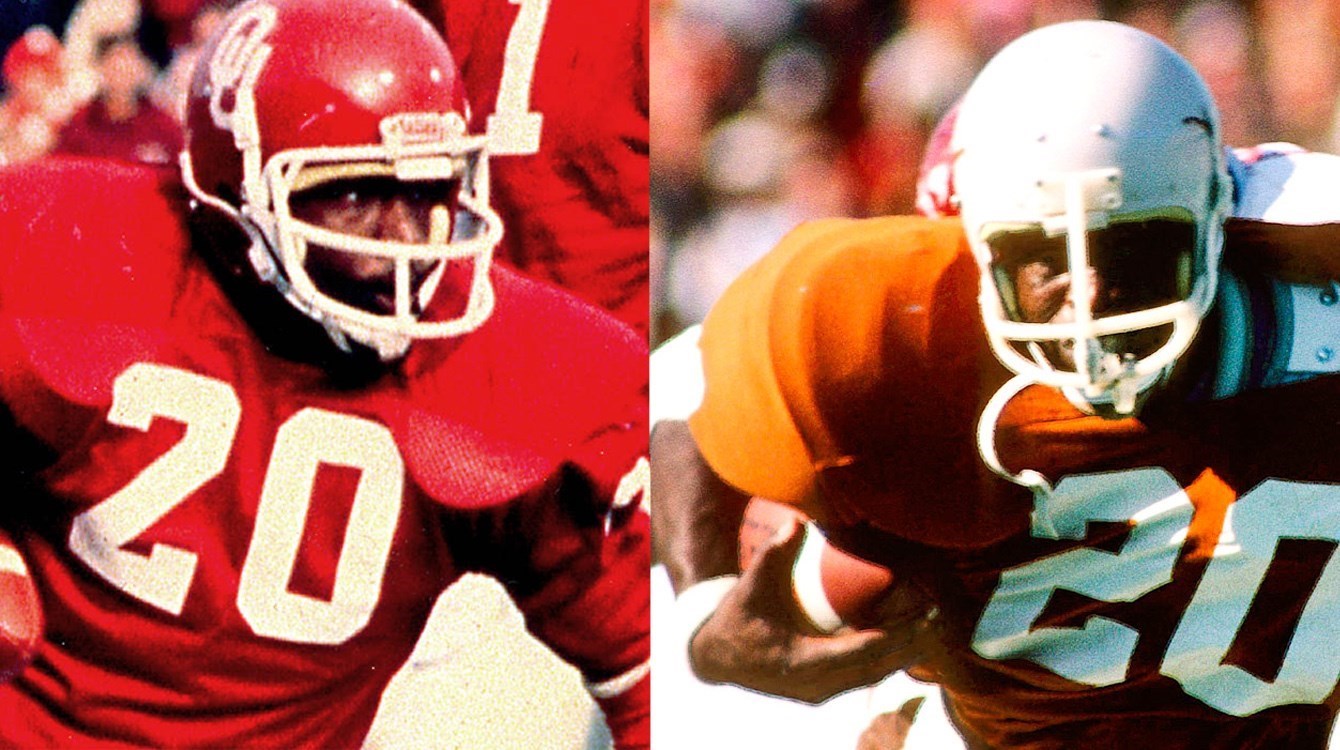 Oklahoma and Texas play this coming Saturday for the 115th time in the “Red River Shootout”, one of college football’s greatest and most storied traditional matchups.

The two schools have a combined nine Heisman Trophy winners between them. Some of the best performances in Heisman history have taken place when the Longhorns and Sooners meet up at the Cotton Bowl in Dallas.

1952
Oklahoma 49, Texas 20
No. 12 Oklahoma, coming off a 49-20 smashing of Pitt, took on a Texas team that was ranked fifth in the preseason but reeling after a 14-3 loss to Notre Dame the previous week. Sooners running back Billy Vessels had a brilliant performance, rushing for 106 yards and three touchdowns on just 15 carries. His big highlight was a 60-yard TD scamper in the fourth quarter to solidify the rout. Vessels finished the season with 1,072 rushing yards and 17 touchdowns on his way to winning Oklahoma’s first Heisman.

1969
Texas 27, Oklahoma 17
The No. 1-ranked Longhorns and the No. 8 Sooners squared off, with Texas coming away with the hard-fought win. Oklahoma running back Steve Owensrushed for 123 yards and one touchdown on 30 carries and also caught two passes for 17 yards. Surprisingly, it was the passing game for the Wishbone-based Longhorns that caught fire as James Street threw for 215 and one touchdown on just 18 attempts. Despite the loss and despite Oklahoma stumbling to a 6-4 mark, Owens won his school’s second Heisman thanks to 1,523 rushing yards and 23 touchdowns.

1977
Texas 13, Oklahoma 6
Another huge matchup of highly-ranked teams saw No. 5 Texas beat No. 2 Oklahoma in a defensive struggle. The Longhorns lost their starting and backup quarterbacks to injury in the game and had to rely on third-stringerRandy McEachern to pull out the victory. Luckily, Texas had a bruising tailback named Earl Campbell and a kicker named Russell Erxleben. The “Tyler Rose” rushed for 124 yards and a touchdown on 23 carries, with 114 of those yards coming after contact. He also threw an interception on an attempted halfback pass. Meanwhile, all Erxleben did was kick field goals of 58 and 64 yards. The Longhorns would go on to finish the regular season undefeated and Campbell’s 1,744 rushing yards and 18 touchdowns netted him UT’s first Heisman. There was one other future Heisman winner on the roster but not on the field that day: OU running back Billy Sims, who missed the game due to injury.

1978
Oklahoma 31, Texas 10
No. 1 Oklahoma got revenge on No. 6 Texas, as Billy Sims rushed for 131 yards and two touchdowns on 25 carries, while also adding a 35-yard reception. The junior running back scored the first two touchdowns of the game — an 18-yarder to open the scoring in the first quarter and a 1-yard run early in the second. Sims keyed a Sooner ground attack that netted 311 yards. Oklahoma would go on to finish 10-1 in the regular season (the only blemish being a 17-14 loss to Nebraska) and Sim would win his school’s third Heisman thanks to 1,762 rushing yards and 20 touchdowns.

1998
Texas 34, Oklahoma 3
Neither program was setting the world on fire in the late 1990s. But Longhorns running back Ricky Williams sure was. The senior was fresh off two-straight 300-yard rushing games heading into this one, including a career-high 350 against Iowa State the week before. OU did a decent job slowing down Williams, who rushed for 139 yards and two touchdowns on 31 carries, but Texas had its way in every other facet of the game (including the passing game, which saw Major Applewhite throw for 293 yards). Williams finished the regular season with 2,124 yards and 27 touchdowns on his way to winning his school’s second Heisman.

2003
Oklahoma 65, Texas 13
This year saw No. 1 Oklahoma defeat No. 11 Texas by the largest margin of victory in Red River Showdown history. It was the fourth-straight win over Texas for OU. Sooners quarterback Jason White was unstoppable, completing 17 of 21 passes for 290 yards and four touchdown passes (with no interceptions). His passer rating was an astronomical 259.81. A 23-point second quarter by OU turned the game into a rout. One of the few highlights for Texas was a 27-yard touchdown run by redshirt freshman quarterback Vince Young, a future Heisman runner up. But this was White’s afternoon. He finished the regular season with 3,744 passing yards and 40 touchdowns, catapulting him to Oklahoma’s fourth Heisman (and first by a quarterback).

2008
Texas 45, Oklahoma 35
This one turned out to be an entertaining showdown between two quarterbacks who would go on to finish 1-2 in that season’s Heisman balloting. No. 1 Oklahoma got 387 passing yards and five touchdowns (with two picks) from sophomore Sam Bradford, while Texas junior Colt McCoy threw for 277 yards and a score (completing 80 percent of his passes). In the end, the Longhorns were too much for the Sooners, who nonethless went on to qualify for the BCS Championship thanks to a Bradford-led offense that closed the regular season by scoring 60 or more points in its last five games. Bradford had a record-breaking season, throwing for 4,464 yards and 48 touchdowns with just six interceptions. He also added five rushing touchdowns and beat out McCoy to win OU’s fifth Heisman in what turned out to be a relatively close vote.

A week after getting shocked by Iowa State in Norman, the Sooners won a tussle against Texas. Heisman winner Baker Mayfield‘s 59-yard touchdown pass to Mark Andrews with 6:53 left bought Oklahoma the win after Texas rebounded from a 20-point deficit to take a 24-23 lead. Mayfield went 17 of 27 for 302 yards with two touchdowns and an interception while also gaining 27 yards on the ground. The victory started the Sooners on an 8-game win streak that propelled them to the College Football Playoff.

The Longhorns beat the Sooners for the third time in six tries thanks to Sam Ehlinger’s heroics. It was the highest-scoring game in series history. Heisman winner Kyler Murray rallied the Sooners from a 21-point fourth quarter deficit to tie the game, but Longhorn kicker Cameron Dicker’s 40-yard field goal with 9 seconds left was the difference in this wild game. Murray passed for 304 yards and four touchdowns on 19 of 26 passing and he also rushed for 92 yards, but he had a couple turnovers that proved costly for the Sooners. Despite the loss, Oklahoma cruised to another appearance in the College Football Playoff.