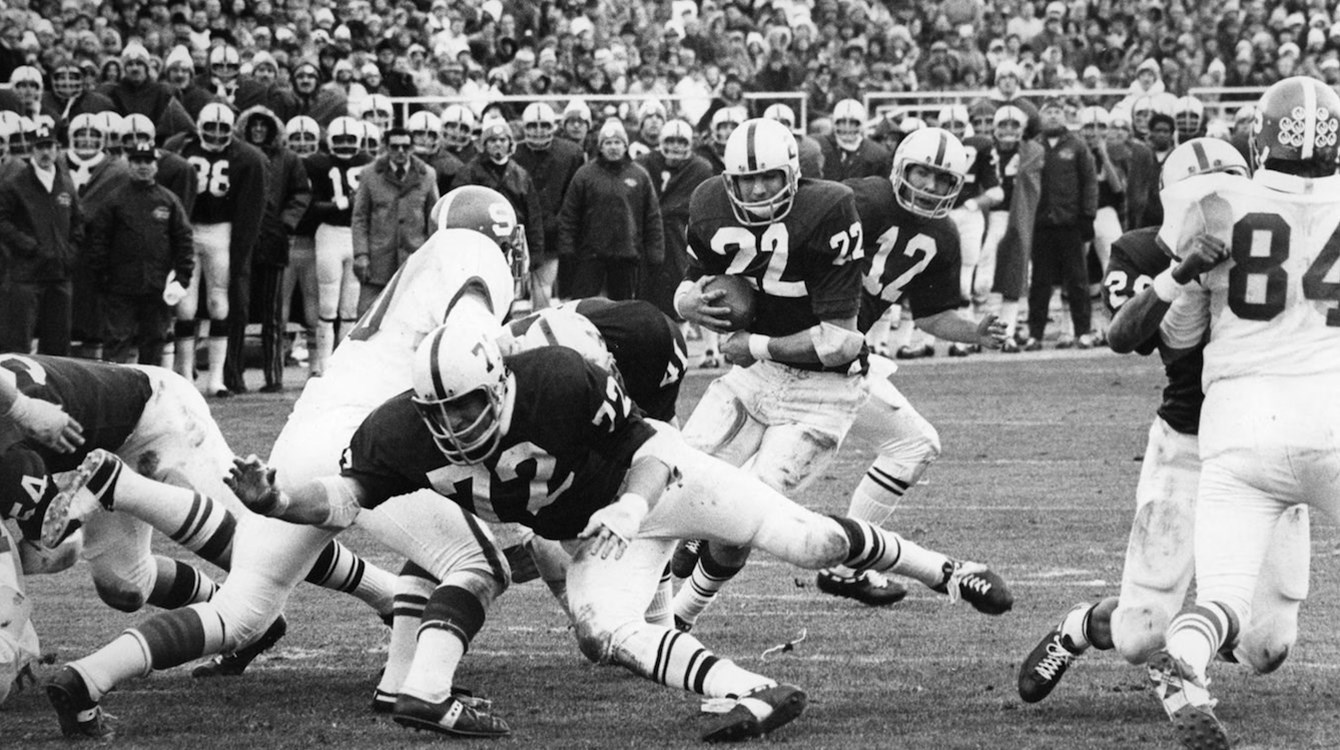 It’s often said that the Heisman Trophy is won by the player who best captures the spirit of a particular season. That would help explain John Cappelletti‘s triumph in 1973.

But the 6-foot-1, 205-pound tailback wasn’t always a star on offense for Penn State. In fact, he played defensive back as a 1971 sophomore (freshmen weren’t eligible yet) due to a loaded Nittany Lions backfield that included Lydell Mitchell (fifth in the Heisman vote in ’71) and Franco Harris (future NFL Hall of Famer).

Cappelletti moved back to offense in 1972 and was very productive, rushing for 1,117 yards and 12 touchdowns for the 10-2 Lions. Penn State’s fortunes looked bright for 1973 and so did Cappelletti’s. As it turned out, the top 10 finishers in the 1972 Heisman race were all seniors, which meant Cappelletti was one of the most widely circulated names under Heisman consideration heading into the fall of ’73.

From the beginning, Cappelletti served as his team’s bell cow, piling up carries and yards at a steady pace as Penn State outscored its first six opponents 208-32. In Game 7, Cappelletti scored four touchdowns at the behest of his leukemia-ridden brother, Joey, as the Nittany Lions crushed West Virginia 62-14.

The next week, Cappelletti rushed for 202 yards on 37 carries in a 42-22 win over Maryland and the Heisman buzz started to increase. Penn State was 8-0 and hadn’t yet been challenged, but that was about to change.

The 6-2 North Carolina State Wolfpack came to Happy Valley on Nov. 10, 1973. This week in Heisman history, Cappelletti had his career day to keep the Lions undefeated while putting himself on the path to his school’s first (and only) Heisman Trophy.

The Wolfpack weren’t intimidated by the setting and forged a 14-9 halftime lead thanks to a powerful running attack. But Cappelletti and the Lions battled back. Wideout Gary Hayman returned a punt 83 yards for a touchdown and Cappelletti gashed the Wolfpack for two more scores and the game was tied at 29 in the fourth quarter. That’s when Cappelletti scored on a 27-yard touchdown run and Penn State prevailed 35-29 in its closest victory of the season.

When the dust settled, Cappelletti had career highs in yards (220) and carries (41), the latter of which is, to this day, a Penn State record.

A week later, Cappelletti notched his NCAA-record third consecutive 200-yard game as he rushed for 204 yards and four touchdowns against Ohio. He ended up rushing for 1,522 yards and 17 touchdowns on the season on a school-record 286 carries as Penn State went 12-0.

At that point, the Heisman was a fait accompli. Here’s how Cappelletti described the process later:

I was in New York on that Saturday for the Bob Hope All-American special that they had back in those days. We were just filming the special, and the cool thing about it was a representative from the Heisman came over and announced it right there. Then I’m whisked away in a limo with Bob Hope, from the studio to the Downtown Athletic Club. That’s one of those things you never dream is going to be happening to you. Once we got to the Downtown Athletic Club, everything exploded: You got reporters and photographers, and I don’t even remember what happened with Bob, but I remember the ride.

Cappelletti easily beat Ohio State tackle John Hicks and Texas fulback Roosevelt Leaks for the Heisman. He also won the Maxwell and Walter Camp Awards and was the UPI National Player of the Year.

At the ceremony, with luminaries such as Vice President Gerald R. Ford in attendance, Cappelletti gave the most famous acceptance speech in Heisman history in honor of the person who inspired him more than anyone, his brother, Joey.

It was an amazing moment in Heisman history, but one that might not have happened if not for Cappelletti’s career day against North Carolina State, 46 years ago this week.