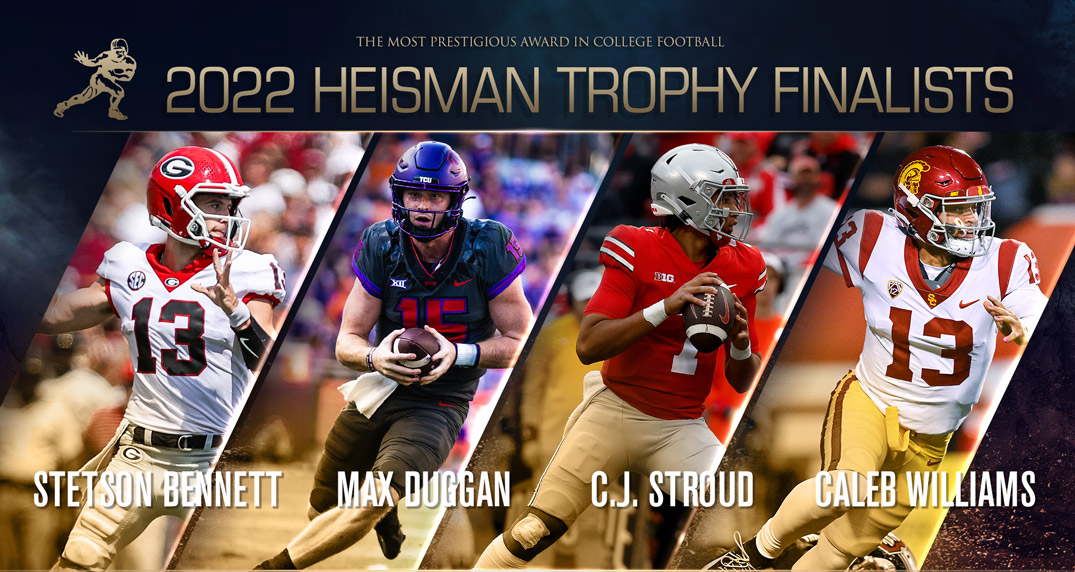 The 2022 Heisman Trophy winner will be announced during the televised Heisman Trophy Ceremony Presented by Nissan that will air Saturday (Dec. 10) at 8 p.m. ET on ESPN.

The Top 10 finishers will be featured on The Top 10 Heisman Trophy Finalists Show Presented by Nissan on Thursday (Dec. 8) at 9 p.m. ET on ESPN.

Bennett, a senior quarterback, has completed 269 of 395 passes (68.1%) for 3,425 yards and 20 touchdowns with just six interceptions while rushing for another 184 yards and seven touchdowns. He has led Georgia to a perfect 13-0 regular season and the 2022 SEC title as well as the top seed in the 2022 College Football Playoff. Bennett, who led the Bulldogs to the 2021 national title and has quarterbacked them to 15 straight wins, threw for over 300 yards four times this year and completed at least 70.0% of his passes in a game five times. His 68.1 completion percentage is ranked 13th nationally and his 8.7 yards per attempt are 14th best.

Duggan, a senior quarterback with 41 career starts at TCU, completed 239 of 368 passes (64.9%) for 3,321 yards and 30 touchdowns with just four interceptions. He also rushed for 404 yards and another six scores, leading the Horned Frogs to a 12-1 season and their first-ever berth in the College Football Playoff. Duggan is tied for seventh nationally in yards per attempt (9.0), ninth in quarterback rating (165.48), tied for ninth in points responsible for (2018) and 12th in touchdown passes (30). His 30 TD passes are the third-most in school history. Duggan passed for over 300 yards five times and had three or more TD passes in a game seven times. He ran for over 100 yards twice in a game, including for 116 yards and two scores against Oklahoma and for 110 yards and a touchdown in the Big 12 championship game against Kansas State.

Stroud, a redshirt sophomore quarterback and second-year starter, completed 235 of 355 passes for 3,340 yards (66.2%) with 37 touchdowns and just six interceptions while leading the Buckeyes to an 11-1 record and a spot in the College Football Playoff. He leads the nation in yards per play (8.75) and quarterback rating (176.25), his 37 TDs are tied for first nationally while his 9.4 yards per attempt are third-best nationally. The Buckeye offense Stroud leads is No. 2 nationally in scoring (44.5). He passed for over 300 yards five times and tossed five or more touchdowns in a game four times, including a season-best six at Michigan State. He is the first quarterback in Big Ten history to have back-to-back 30-touchdown seasons.

Willams, a sophomore quarterback and a first-year USC starter after transferring from Oklahoma, has thrown for 4,075 yards on 296 of 448 passing (66.1%) with a national co-leading 37 touchdown passes against just four interceptions. His passing yards is fourth-most nationally, his quarterback rating (167.94) is fifth-best and his passing yards per game (313.5) is sixth-best. Williams, who led USC to an 11-2 season after the Trojans went 4-8 in 2021, is third nationally in total offense with 4,447 yards with a total that broke USC’s school record (4,225, 2017). He has also rushed for 372 yards (the most at USC in at least 70 years) on 109 carries with a team-best 10 TDs. Williams’ 47 total touchdowns lead the country, as do his 282 points responsible for while his total touchdowns are a school record. He threw for over 300 yards seven times, including twice over 400 yards.

There have now been 171 players invited to New York as Heisman finalists since the practice was first instituted in 1982.

The 2022 Heisman Trophy ballots went out to 929 electors, which includes 870 members of the media, our 58 living Heisman winners and one overall fan vote presented by Nissan, premier partner of the Heisman Trophy. All ballots were submitted electronically to the independent accountants at Deloitte.