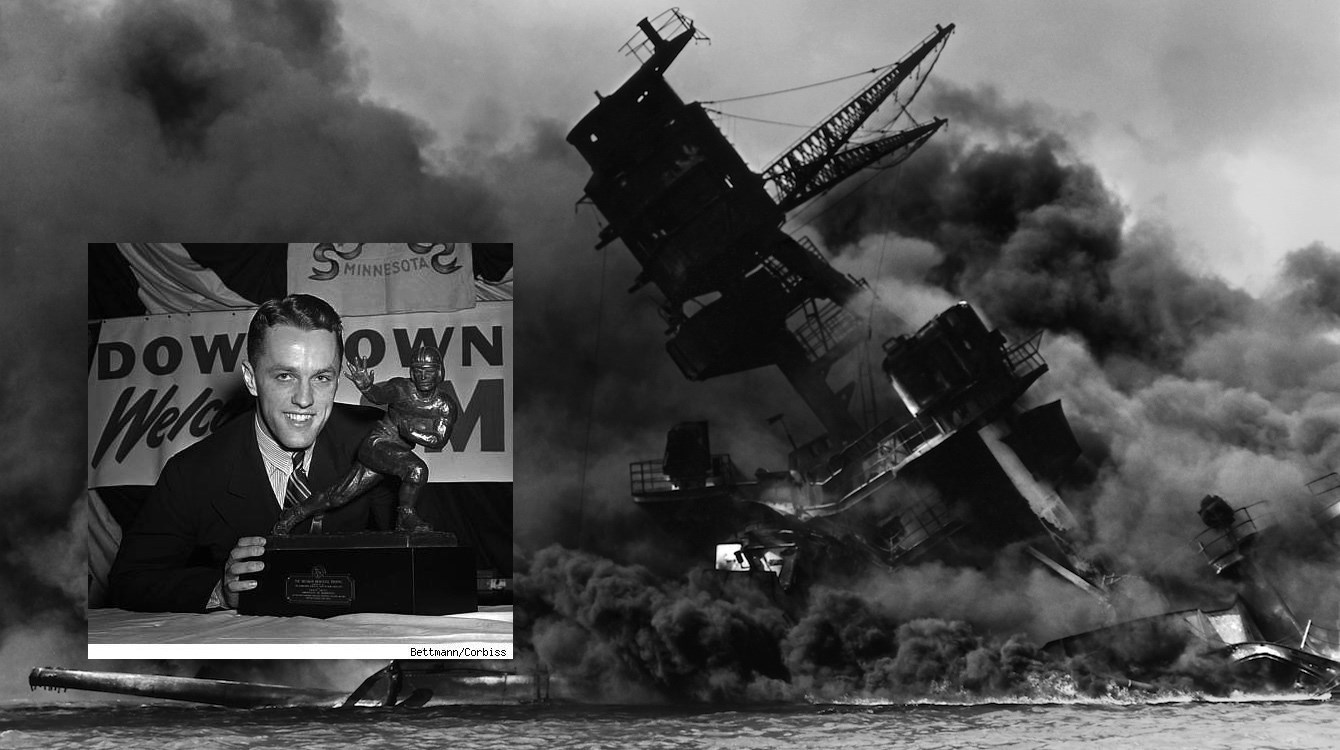 In observance of the 74th anniversary of the Japanese attack on Pearl Harbor, here is a transcript of the speech given by the University of Minnesota’s Bruce Smith at his Heisman dinner on Dec. 9, 1941, two days after the “date which will live in infamy”:

“Mr. Chairman, Mr. President and members of the Downtown Athletic Club, ladies and gentleman: So much of emotional significance has happened in such a brief space of time that the task of responding on such an occasion leaves me at a loss to assign relative value.

“No college football player could ask for a greater honor or thrill than to have his name added to the list of Jay Berwanger, Larry Kelley, Clint Frank, Davey O’Brien, Nile Kinnick and Tom Harmon, who preceded me in winning this coveted Heisman Trophy. My gratitude is sincere and my appreciation deeply felt. I can really only accept this trophy on behalf of my great Minnesota teammates and one of the greatest coaches of all time Bernie Bierman.

“Our team was good this year and literally carried me along to this honor. It was a year which was so productive with successful, outstanding and colorful players. The sportwriters and radio ambassadors had to make an exceptionally difficult decision, as was indicated by the small margin of votes between Angelo Bertelli of Notre Dame and myself.

“I hope I can justify your decision of the majority. My dad, who is here this evening, is a lawyer back in Faribault, Minnesota. He tells me that the proper way to explain it is that I would be holding the trophy in trust of my teammates. Since I seem to be getting elaborate, however, I want to openly and firmly thank those teammates and my coach for without them this honor would have been absolutely impossible. To them I owe everything.

“Football certainly has become an important part of American life. It even seems to have a place in diplomacy. I remember reading in the newspapers that Mr. Caruso, the Japanese envoy, told the newspapermen on arriving here that he expected to carry the ball for a touchdown. As you all know by now, it didn’t work out that way. It looked as though he tried a quarterback sneak before the field was ruled.

“In the Far East they may think American boys are soft, but I have had, and even have now, plenty of evidence in black and blue to prove that they are making a big mistake. I think America will owe a great debt to the game of football when we finish this thing off. If six million American youngsters like myself are able to take it and come back for more, both from a physical standpoint and that of morale. If teaching team play and cooperation and exercise to go out and fight hard for the honor of our schools, then likewise the same skills can be depended on when we have to fight to defend for our country.

“This is my first visit to New York and I find it very exciting. To the members of the Downtown Athletic Club, I offer my sincere thanks. “