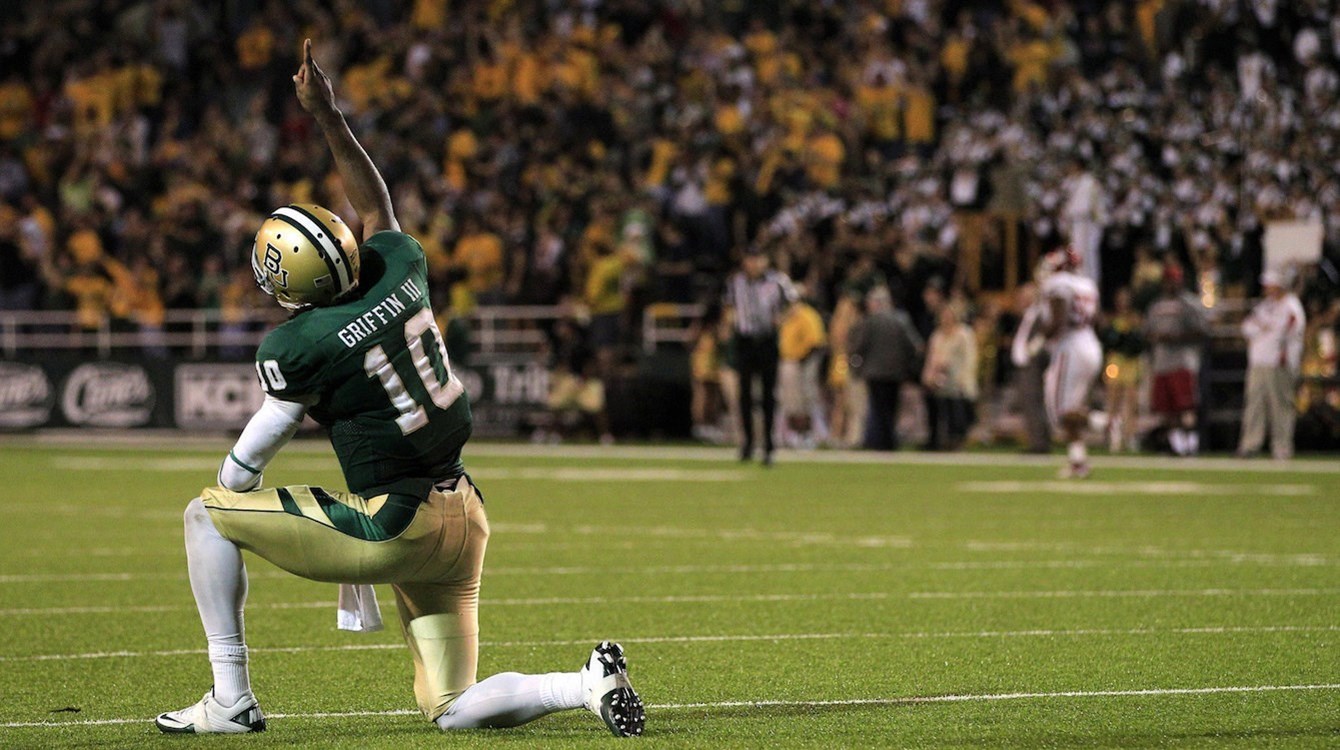 In mid-November of 2011, the Heisman Trophy race was thought to be a fait accompli.

Stanford quarterback Andrew Luck, the returning Heisman runner up from 2010, was having yet another stellar season and looked to be the odds-on favorite for the award heading into the home stretch of the season.

Baylor’s Robert Griffin III was also having a great season, but three October losses by the Bears seemed to knock the junior quarterback out of contention.

This week in Heisman history, Griffin III proved all those experts wrong. On Nov. 19, 2011, “RG3” engineered a dramatic last-second, 45-38 upset of No. 5 Oklahoma to ignite a late-season dash to the Heisman.

Griffin III’s statistical achievements heading into the game were impressive. Through nine games, he had 3,093 passing yards with 29 touchdowns passes and 5 interceptions, plus 478 yards and 5 touchdowns on the ground. But the question remained: Could Griffin III help Baylor get over the hump?

In part, that would mean beating the Sooners for the first time ever. But Oklahoma had a 20-0 record over Baylor — and many of those games weren’t close.

That wouldn’t a problem for these Bears. The two Big 12 teams traded field goals in the first quarter, but Baylor forged a 17-10 halftime lead thanks to a 69-yard strike from Griffin III to Tevin Reese.

The second half turned out to be a barn burner, with both teams scoring 28 points. But it was Griffin III’s 87-yarder to Kendall Wright to tie the score at 24 that indicated that something special was in the works that night.

Another Griffin III touchdown pass and a Terrance Ganaway run put the Bears up 38-24 early in the fourth quarter, but the Sooners stormed back to tie it at 38 with just 51 seconds left to play. It looked like Oklahoma might once again survive to assert its dominance in the series.

But 51 seconds can be a long time, especially with a talent like Griffin III under center. Three runs, including two RG3 scrambles totaling 30 yards, plus a 12-yard completion to Wright gave the Bears a first down on the Oklahoma 34-yard line with 19 seconds left to play and no time outs remaining. Overtime loomed.

Griffin III finished with a school-record 479 yards passing and 4 touchdowns, plus another 72 yards on the ground. In all, he totaled a season-best 551 yards of total offense. More importantly, the Bears had finally arrived. They would go on to finish 10-3, their best season since 1986.

And he was right.