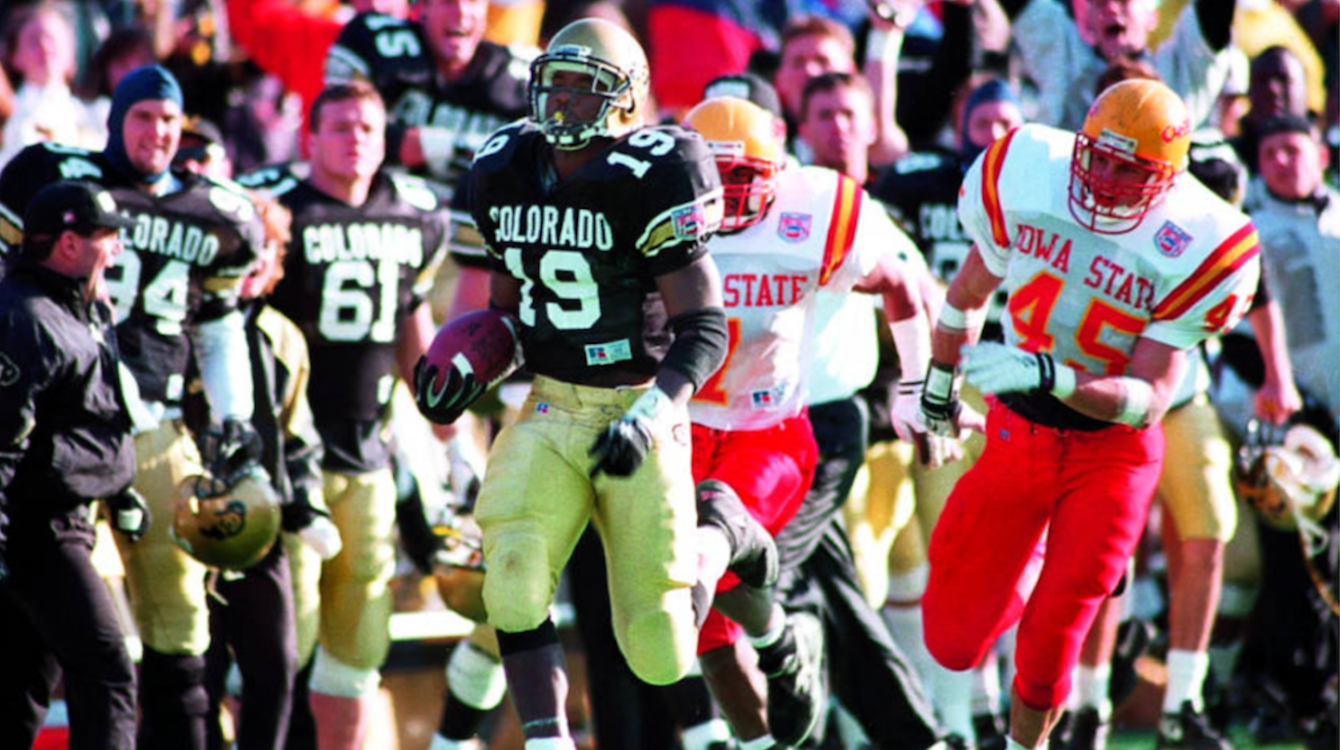 The 2,000-yard rushing mark is a big deal in college football.

Marcus Allen of USC was the first to eclipse that number in 1981, rushing for 2,342 yards on his way to winning the Heisman. Since then, 21 players have joined this elite group, with more than a few of them ending up as Heisman winners, too.

Colorado’s Rashaan Salaam was the fourth to accomplish the feat back in 1994. The game that got him over the hump? A 41-20 victory over Iowa State in the regular season finale, this week in Heisman history.

Salaam came into the contest with 1,796 yards on the season, topping the 100-yard barrier in every game but one (an 85-yard effort vs. Wisconsin, though he scored four touchdowns). The 6-1, 225-pound junior from San Diego rumbled for 317 yards against Texas, 202 yards against Kansas State and 232 yards at Kansas. Thanks to his legs, the No. 7 Buffaloes sat at 9-1 on the year, their only blemish a 24-7 loss to Nebraska in late October.

While Salaam was considered a leading contender for the Heisman, he really needed a big game against the happless (and winless) Cyclones to hold off fellow running back Ki-Jana Carter of Penn State.

Salaam dialed up one of his biggest games as the Buffaloes rolled Iowa State in Boulder on Nov. 19, 1994.

From the first quarter, when he ripped off a 40-yard run to the Iowa State 1, to the fourth quarter, when he raced 67 yards for his 24th touchdown of the season, Salaam was dominant. When the dust cleared, he had 259 yards on just 29 carries — averaging a superb 8.9 yards per pop — with two touchdowns scored. In the process, he pushed his season rushing total to 2,055 yards (with 24 TDs), making him the first college player since Barry Sanders in 1988 to rush for more than 2,000 yards.

Salaam wasn’t the only star for CU that day as Buffs quarterback Kordell Stewart added 89 yards rushing on 13 carries and completed 14 of 21 passes for 196 yards.  Colorado outgained the Cyclones, 576 yards to 243.

Salaam’s heroics, as well as those of his teammates, were overshadowed a bit after the game when Buffaloes head coach Bill McCartney announced his resignation, effective immediately after the bowl.

“I’ve been thinking about this for some time now,” McCartney said at the post-game news conference. “I’ve been here 13 years. It’s time. There are things I want to do as a family. This chapter has ended. I don’t know quite what’s around the corner.”

For Salaam, a prestigious award was around the corner. He won Colorado’s only Heisman Trophy in solid fashion on December 10, totaling 1,793 points to Carter’s 901. The Buffs went on to finish 11-1 after crushing Notre Dame in the Orange Bowl. The new Heisman winner was held to 83 yards, but he did add three more touchdowns.

Salaam chose to forgo his final season of eligibility and was selected by the Chicago Bears in the first round of the 1995 NFL draft with the 21st overall pick.