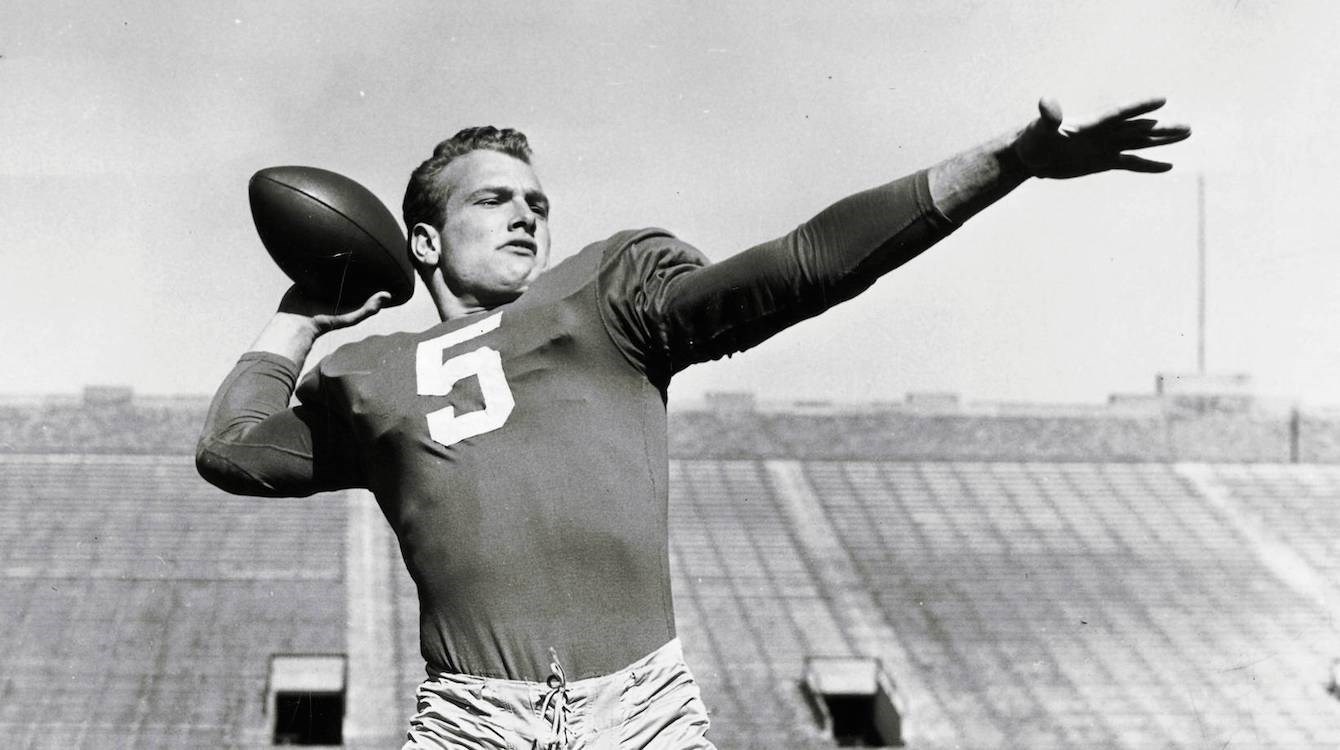 Why was that so strange? Well, it was one of just two games won by the Fighting Irish that entire season.

This week in Heisman history, Paul Hornung — the fabled ‘Golden Boy’ — rushed for 91 yards and three touchdowns (including the winning score), kicked three extra points, punted and kicked off, intercepted a pass and completed four passes for 103 yards as the Fighting Irish snapped a five-game losing streak by defeating North Carolina, 21-14.

It was Hornung’s final game in South Bend and one of the few bright spots in an otherwise dismal season. That 1956 Notre Dame team coached by Terry Brennan was laden with sophomores and wound up with the program’s first losing record since 1933.

One of the seniors on the team was Hornung, a 6-foot-2, 205-pound athlete who played quarterback, left halfback, fullback and safety during his career. As a sophomore, Hornung served as the team’s backup fullback and also averaged 6.1 points per contest while earning a basketball letter. As a junior, he finished fourth nationally in total offense with 1,215 yards and placed fifth in the Heisman voting behind Ohio State’s Howard Cassady.

As a senior, he ranked second nationally in total offense (1,337 yards) and accounted for more than half the Irish scoring.

“Paul is a very fine athlete,” said Brennan. “He is endowed with great natural ability and he works diligently to improve in any way possible. Along with these attributes he has the same fine balance that has been evident in many great athletes.”

He displayed all kinds of athleticism against the Tar Heels that November afternoon. His 28-yard pass to Jim Morse at the start of the second quarter set up his first touchdown, a one-yard plunge that put Notre Dame up, 7-0. That quickly became 14-0 when Hornung scored from the three-yard line following a long run by teammate Aubrey Lewis. North Carolina closed the gap to 14-7 late in the second quarter and threatened to score again before the half, but Hornung snuffed out that intention with his pick off of a Tar Heel pass.

North Carolina tied things up in the third and threatened to take the lead in the fourth, driving down to the Irish 37-yard line. But a fourth-down pass attempt failed and Notre Dame took over on downs with 5:54 remaining. Eleven plays later, Hornung was in the end zone for his third touchdown and the Irish secured their final win of the year.

Though the Irish ended the season at 2-8, that didn’t stop Hornung from becoming the fifth Notre Dame player to win the Heisman Trophy — and the only player to win the award from a losing team. He beat out Tennessee running back Johnny Majors in a close vote, winning just one of the five voting regions.

Hornung went on to an outstanding career in the NFL and is a member of the Pro Football Hall of Fame.