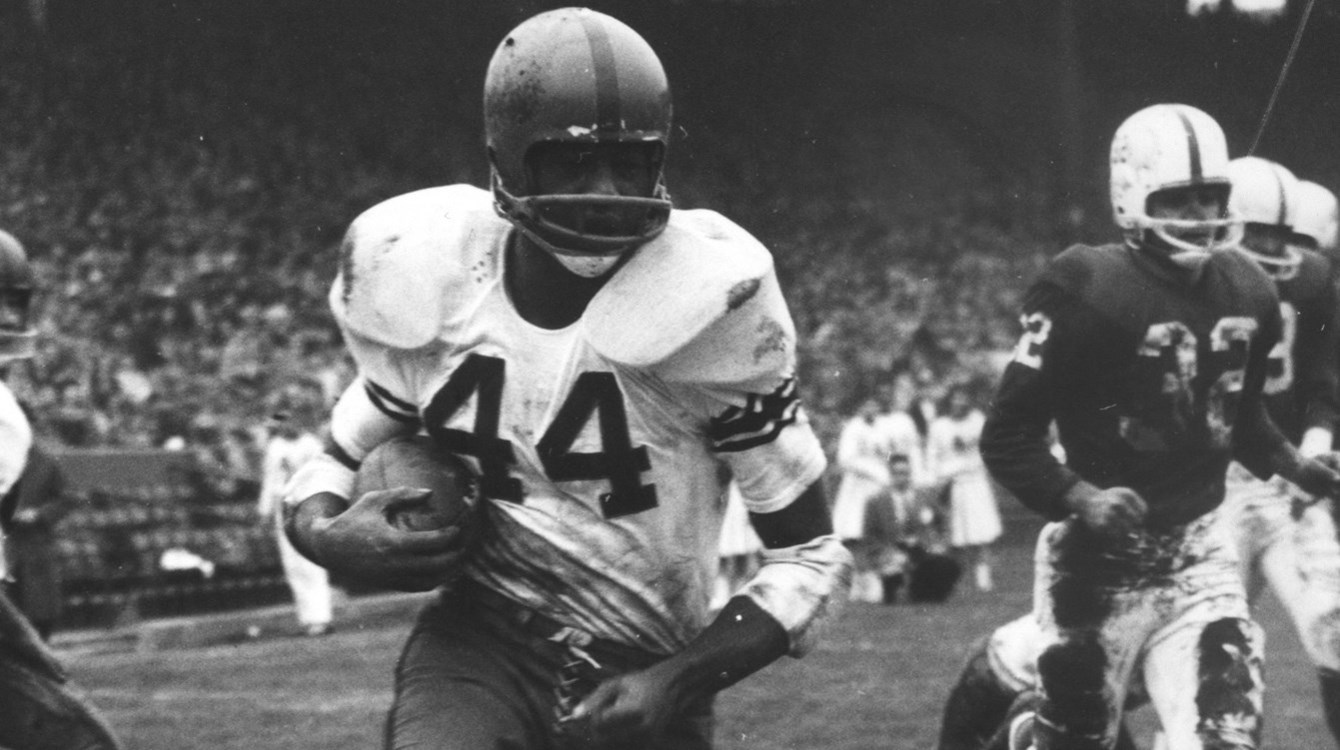 The late 1950s and early 1960s were wonderful years for Syracuse football.

In 1959, the Orange won their only national championship, going 11-0 under the guidance of coach Ben Schwartzwalder. Among the stars on that squad was a 6-foot-2, 210-pound sophomore running back named Ernie Davis, who led the team in rushing and scoring.

Davis had come to ‘Cuse on the heels of the great Jim Brown, even taking over his No. 44 jersey and, by his 1961 senior season, the ‘Elmira Express‘ was considered the favorite to do something Brown never could — win a Heisman Trophy.

This week in Heisman history (Sept. 23, 1961), Syracuse traveled to Portland, Ore., to take on the Beavers of Oregon State in the season opener for both teams. The Orangemen, as they were then called, were ranked 10th in the preseason by the Associated Press while the Beavers were among the “others getting votes.” (The AP ranked only 10 teams 1961-67.)

This game featured two players who would go on to establish two firsts in college football. Davis became the first black Heisman Trophy winner in ’61, and OSU quarterback Terry Baker would become the first West Coast player to win the Heisman in 1962.

Things got off on the wrong foot for the Beavers that day. A first-quarter fumble gave the ball to the Orangemen and led to Davis slanting off the right side of the line, bulldozing a would-be tackler and scoring the game’s first touchdown from 16 yards out.

The early turnover was the first of five OSU miscues, but Baker kept things interesting, pushing the Beavers out to an 8-7 lead following a remarkable 36-yard touchdown off a scramble, plus a two-point conversion. “One had to think back to the days of Albie Booth to recall anything quite like it,” Sports Illustrated writer Alfred Wright later wrote.

From there, however, Syracuse’s powerful line — and Davis — took over. His second touchdown of the day, a fourth-quarter plunge from three yards out, clinched the 19-8 win for the Orangemen. His stat line against OSU: 68 yards and two touchdowns on 12 carries, two catches for 15 yards and, in that era of single-platoon football, a stellar effort at corner as he helped hold Baker to just 4 of 10 passing for 31 yards.

Syracuse would go on to finish 8-3, including a 15-14 win over Miami in the Liberty Bowl. Davis rushed for 823 yards and 15 touchdowns and caught 16 passes for 157 yards. He also intercepted two passes on defense.

Voters recognized his excellence by awarding him the Heisman over Bob Ferguson of Ohio State and James Saxton of Texas. Davis won the East region and finished third in the South, Midwest and Far West. It was the second-closest vote in Heisman history at the time, with Davis edging Ferguson by a mere 53 points.

Baker finished 11th nationally in total offense in ’61, setting up his own run for the Heisman in 1962. An incredible all-around athlete, he remains the only collegian to win a Heisman and participate in a basketball Final Four.

Of course, we all know the sad and tragic tale of Davis — he was diagnosed with leukemia shortly after graduating from Syracuse and he passed away on May 23, 1963.

But on that day in September of ’61, there was simply no stopping The Express.