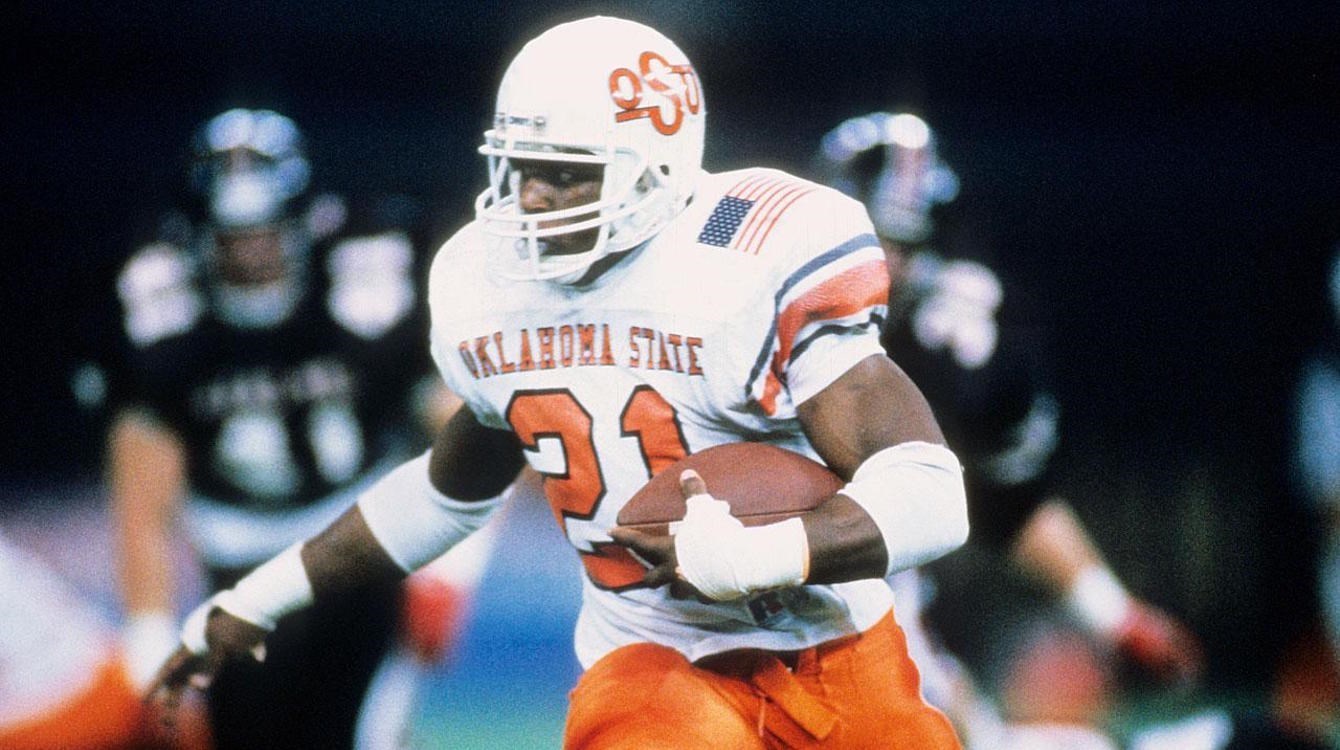 When Oklahoma State traveled to Lincoln to take on No. 7 Nebraska on October 15, 1988, it was as a top 10 team averaging a nation-leading 50 points per game.

The Cowboys also had the nation’s leading rusher, Barry Sanders.

Except not a whole lot of people around the country at that time were convinced that Barry Sanders — a junior who had piled up 813 yards and 13 touchdowns in his first four games — was for real.

Imagine a world where people doubted the talent of Barry Sanders.  It actually existed.

“Sure, he’s running wild on the Tulsas of the world, but let’s see how he does against real defenses like Nebraska’s or Oklahoma’s” was the typical hot take of the early 1988 season.

This week in Heisman history, Sanders showed the world he had the talent to gash any defense he went up against, as he galloped for 189 yards and four touchdowns on a then-career-high 35 carries in a wild 63-42 loss to the Cornhuskers.

If the game had started in the second quarter, the No. 10 Cowboys might’ve come away with their first victory over Nebraska since 1961. Instead, Big Red exploded for 35 first quarter points and ran its lead to 42-0 before the Oklahoma State offense, led by the triumvirate of quarterback Mike Gundy, wide receiver Hart Lee Dykes and Sanders, got untracked.

Sanders tallied two touchdown runs in the second quarter as the Cowboys cut Nebraska’s lead to 49-21 heading into the half.  He added his third touchdown, a 1-yard plunge, in the third quarter and his fourth, a 4-yard run, with 5:46 to play.

But it was his last carry, a 9-yarder late in the game, that was the most significant, as Sanders became the fifth player to crack 1,000 yards rushing five games into a season (several more runners have since done so). When the clock expired against Nebraska, Sanders season totals were 1,002 rushing yards and 19 touchdowns scored.

After this performance, the college football world finally understood that Sanders belonged in the Heisman discussion.

The 5-8, 200-pounder justified that understanding for the remainder of the 1988 season, putting the final touches on perhaps the greatest individual season in college football history — 2,628 rushing yards, 37 TDs, 34 NCAA records set — and culminating in his winning of the Heisman Trophy.