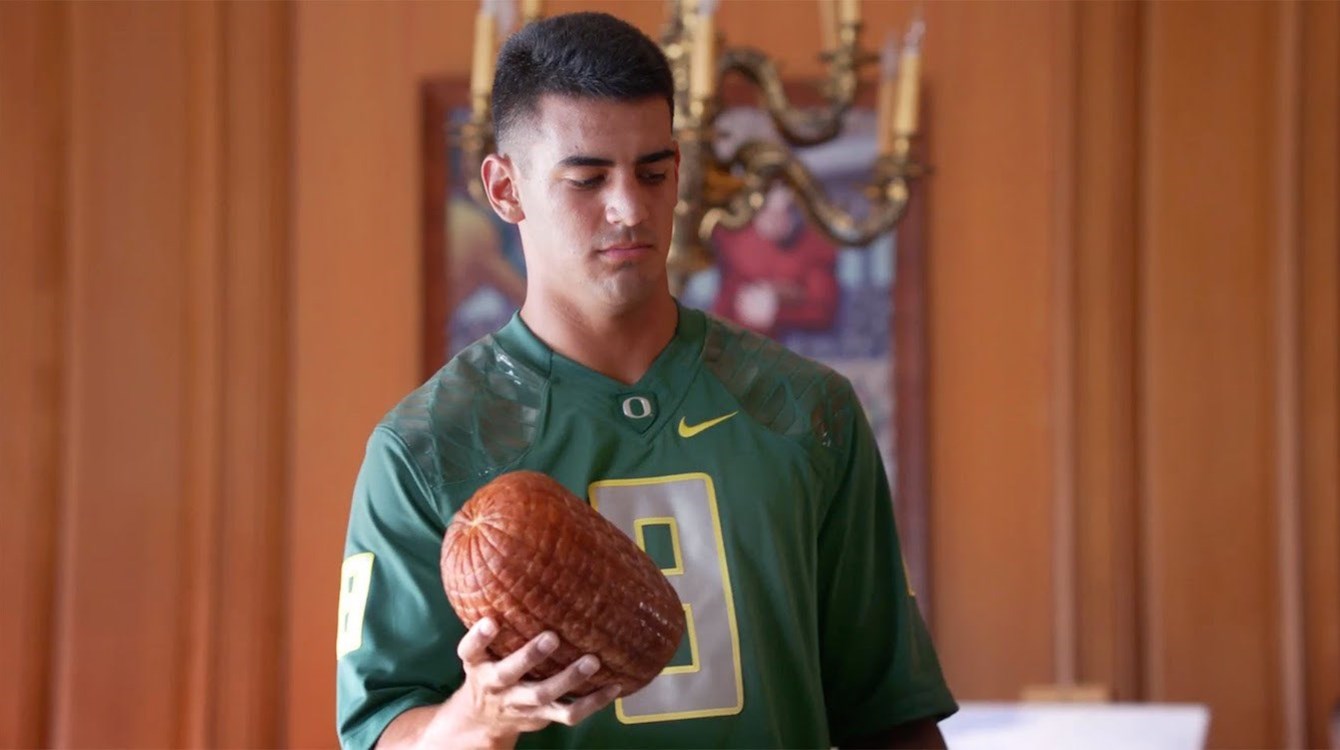 The 2015 Heisman race is officially underway. Continuing our traditional weekly feature on Heisman.com, we’ve rounded up the latest news and updates from around the media world to help keep you posted on what’s happening with current contenders and past winners.

The first Heisman watches of the season have already arrived and — surprise, surprise — some of the names being bandied about are not exactly who everyone was talking about a week ago.

Let’s give them a warm welcome to the campaign: Stewart Mandel ofFoxSports.com has UCLA freshman quarterback Josh Rosen leading his top five … The Associated Press’s Ralph Russo notes that Rosen’s debut stacks up nicely with those of recent Heisman winners … Mark Bradley of the Atlanta Journal-Constitution threw Georga Tech freshman running back Marcus Marshall into the mix … Texas A&M defensive end Myle Garrett is also getting some love … Notre Dame quarterback Malik Zaire has also been mentioned after a stellar opener against Texas … And look out for safety Karl Joseph of West Virginia, says theWest Viginia Metro News.

Don’t worry, there is still plenty of buzz about the more established candidates. TCU quarterback Trevone Boykin remains in the mix despite his team’s close winover Minnesota  … SI.com’s Zac Ellis concurs … Alabama running back Derrick Henry‘s big game against Wisconsin garnered him some praise …  USC’s Cody Kessler is being talked about after leading his team over Arkansas State … And one team with a lot of potential candidates still hasn’t played. That’s Ohio State, which takes on Virginia Tech on Monday night, so here’s a look at Buckeye running back Ezekiel Elliot.

You can compare the season openers of the current candidates with all the past winners by checking out this story right here.

We did a story last week about new Heisman replacements Vernon Adams and Everett Golson taking over for Marcus Mariota and Jameis Winston, respectively. Both had stellar season debuts, with Adams passing for 246 yards and two touchdowns while adding 94 rushing yards, and Golson passing for 302 yards and four touchdowns. It’s not an easy job replacing a Heisman winner so, good job, gentlemen.

It wasn’t all good times for budding Heisman contenders. Our condolences go out to fifth-year senior BYU quarterback Taysom Hill, who saw his season end early for the third time in four years after suffering a Lisfranc fracture in his foot against Nebraska. His injury overshadowed a dramatic 33-28 win by the Cougars over the Cornhuskers, with the winning points coming on the game’s last play. There’s no word yet on whether the athletic dual threat will seek a sixth-year of eligibility and — quite understandably — BYU coach Bronco Mendenhall downplayed such talk after the game.

”Taysom has a bright future in the world of finance and business and family and all that,” Mendenhall said. ”We’ll let all of this kind of calm down for a little bit and maybe have a clearer head with a different perspective. I’ll let him speak for himself on that one.”

While Hill went down for the season, another contender got some better news. Arizona linebacker Scooby Wright had surgery on a torn meniscus following his team’s win over Texas-San Antonio and might be back in time for Pac-12 conference play.

In Other Heisman News…

The Tennessean asks: Who has the edge between Jameis Winston and Marcus Mariota? … Charlie Ward‘s retired No. 17 jersey was brought out of retirement Saturday by Seminoles cornerback Jalen Ramsey. Ward explained his decision after:

“I have a few people texting me about Jalen Ramsey wearing my #17. I had the great pleasure of meeting Jalen L. Ramsey in high school at Brentwood Academy and he was a model student and team leader. Over the past 3 years, our friendship has grown and he has exemplified the character and leadership that I would like for my son to model. Jalen came to speak at my Mentor Leadership Camp this summer and I was impress with his maturity and love for Christ. We were discussing what number he was going to wear on Kick-offs this season and I told him he could wear my number if he liked bc I know he will represent all #17 stood for as a student athlete. Jalen called me today and asked if could wear my #17 that has been retired since 1993. I agreed to allow him to wear it for this season on kick- offs. Jalen sent me this quote this afternoon…”I am honored and appreciate you so much! I will wear it proudly and make you proud!” Thank you.“

Check out the rest of the commercials at the Nissan Heisman House website.