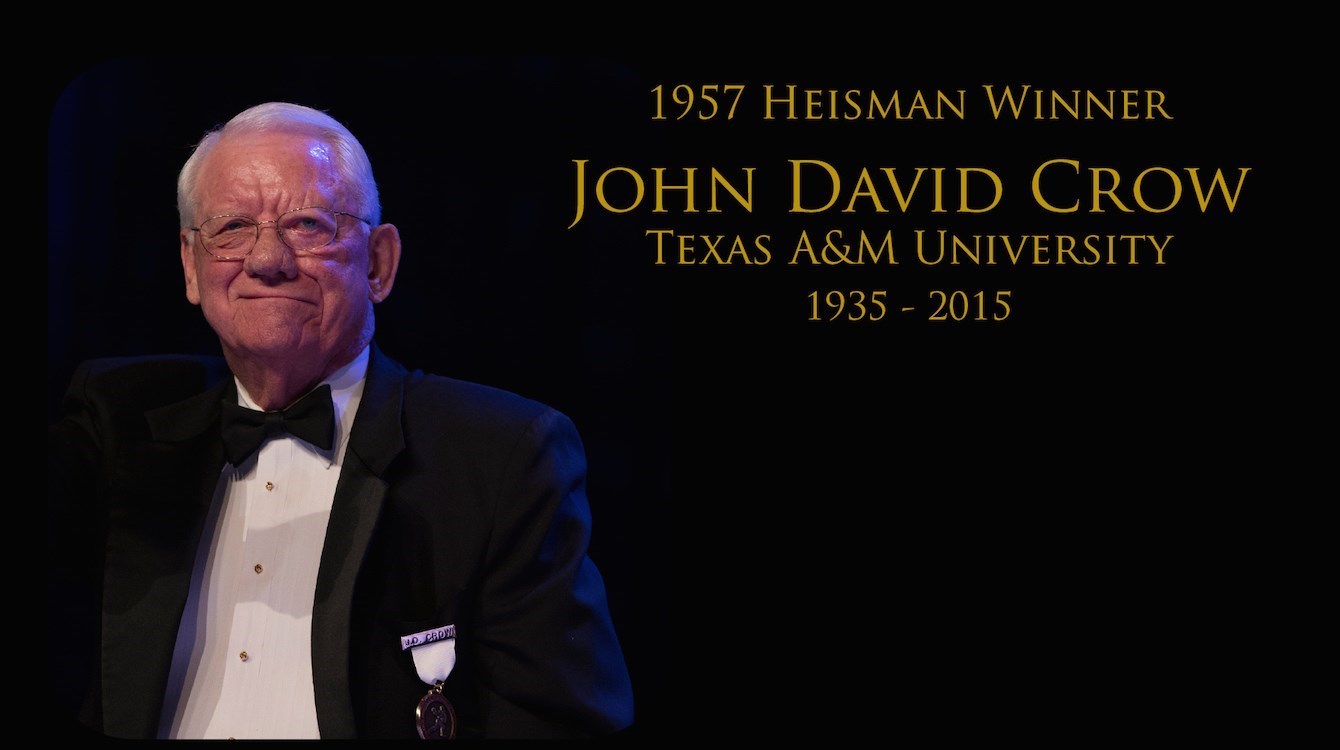 The Heisman fraternity lost one of its great members with the passing of John David Crow this past Wednesday (June 17).  He was 79.

“The Heisman Trust is saddened by the loss of John David Crow,” said Trust president William Dockery. “He represented the award with honor and dignity. Our thoughts go out to his family, friends and the Texas A&M community. We will all miss him.”

The former Texas A&M running back won the Heisman in 1957 and later went on to play 11 seasons in the NFL, making four Pro Bowls. He is a member of the College Football Hall of Fame.

Born in Springhill, La., Crow was recruited to A&M by Paul ‘Bear’ Bryant and, at 6-foot-2, 220 pounds, he was an atypically large back for his era. His power running made him a force to be reckoned with in the old Southwest Conference.

By his senior year, he was dominant on both sides of the ball. Despite missing roughly three games due to injury, he rushed for 562 yards and six touchdowns, caught two passes and threw five touchdown strikes. On defense, he had five interceptions.

Bryant told Heisman voters that “they should do away with the thing” if they didn’t vote for Crow. They heeded the legendary coach, giving Crow the trophy over defensive tackle Alex Karras of Iowa. He is joined by Johnny Manziel (2012) as the only other Aggie to win the award. After his playing career, Crow coached with Bryant at Alabama and was on the staff at Northeast Louisiana University before becoming athletic director at NLU.

He was residing in College Station, Texas, when he passed.

“It was something I had never dreamed of. I didn’t even know anything like it went on in the United States. It was not something you talked about back then like we do now. I’m so happy that it has become what it has, not just because we have one here in our house, but because it’s good for college football.”

On the Heisman experience

“It was great. We had dinner on the 13th floor of the Downtown Athletic Club and we could see the Statue of Liberty out the window. The night of the presentation, they had a bunch of microphones sitting there at the podium for CBS, NBC and all that, but the only one I saw was from Movie Tone which was the one that you saw in the movie theaters when I was growing up. Those were the newsreels which ran when you went to go get popcorn. I recognized that mic and thought I might be seen in the movie theaters back in Springhill. But you can’t even compare it to the way it is today. I’m so fortunate and so happy that it’s changed.”

On what the Heisman really means

“I went to New York on behalf of the coaching staff, my teammates, the 12th man, the managers and the trainers. I accepted the award on behalf of them. I’m just keeping it for them. Football is the ultimate team sport. No one can do anything in football if you don’t have a little help. Of course some people can make marvelous plays and, rightfully so, they should be patted on the back for that. But still when you get right down to it, winning and losing the game is the most important thing. That’s what the Heisman award stands for — helping your teammates win games.”