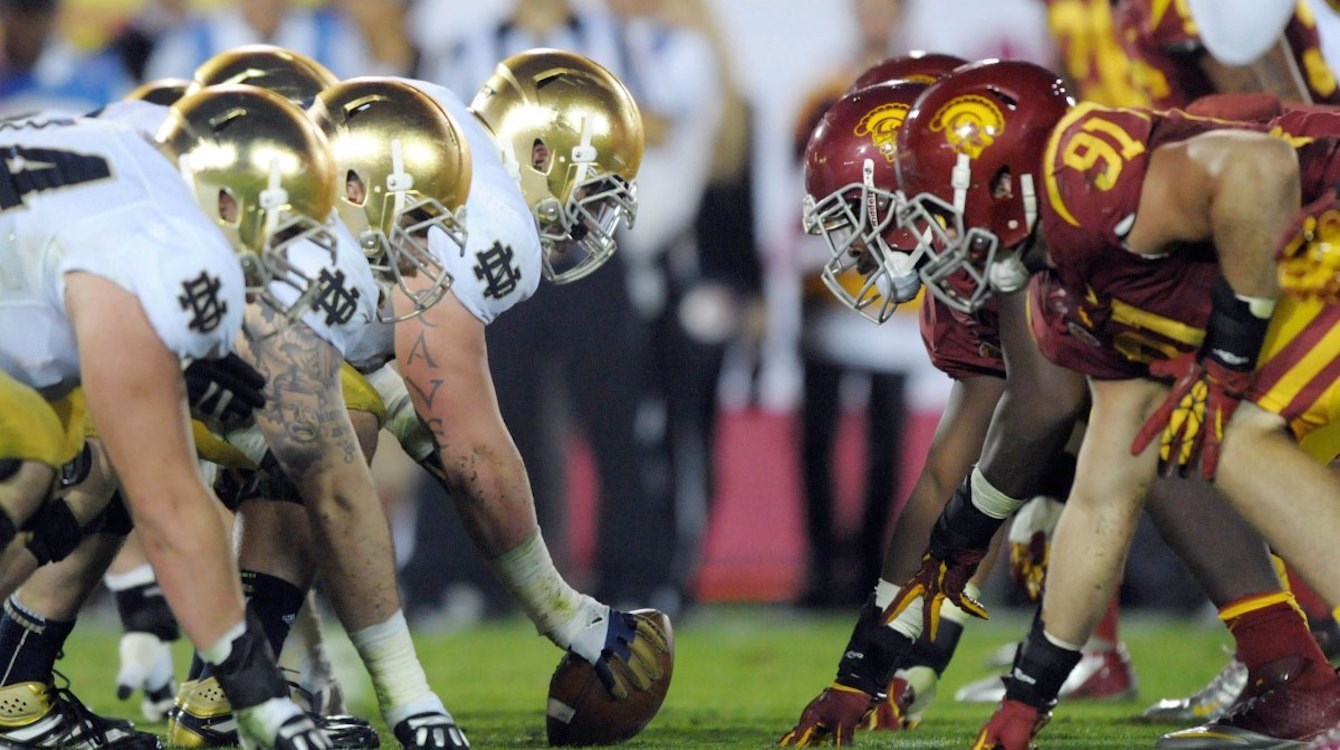 USC and Notre Dame play this coming Saturday for the 89th time in what is widely regarded as college football’s greatest intersectional rivalry.

The two schools have a combined 13 Heisman Trophy winners, more than any other rivalry. In fact some of the greatest games in Heisman history have taken place between the Trojans and the Fighting Irish.

1947
Notre Dame 38, USC 7
There were 104,953 on hand for this one, the highest attendance for a football game at the Los Angeles Memorial Coliseum.  Heisman winner John Lujack quarterbacked the 8-0 Irish to a romp over the Rose Bowl-bound, 7-0-1 Trojans. Notre Dame’s roster also included 1949 Heisman winner Leon Hart. That Irish squad finished 9-0, won the national title and is considered one of the great college football teams of all time.

1949
Notre Dame 32, USC 0
Leon Hart scored the game’s first TD a 40-yard reception as the No.1 Irish blanked the No. 17 Trojans. Notre Dame went on to yet another national title. There were three Irish in the top eight of the Heisman vote that year: Hart the winner, quarterback Bob Williams in fifth and halfback Emil Sitko in eighth.

Highlights of the 1949 USC-Notre Dame game:

1956
USC 28, Notre Dame 20
The unranked, struggling Irish and Heisman winner Paul Hornung gave it a good effort but fell to the No. 20 Trojans. Notre Dame finished 2-8, making Hornung the only Heisman winner ever to come from a losing team. Hornung, who had two dislocated thumbs, moved to left halfback (from quarterback) against SC and scored on a 95-yard punt return. ‘Jaguar’ John Arnett of USC placed 10th in that year’s Heisman vote

1964
USC 20, Notre Dame 17
One of the great comebacks in the series saw unranked USC rally from a 17-0 halftime deficit to defeat unbeaten, No. 1 Notre Dame, 20-17. Heisman Trophy winner John Huarte threw a touchdown pass to Jack Snow (fifth in that year’s Heisman vote) in the first half and guided the Irish on two other scoring drives, but he was stymied in the second half. Trojan tailback Mike Garrett, the 1965 Heisman winner, played a key role in this game, which was decided on a 15-yard TD pass from Craig Fertig to Rod Sherman with less than two minutes to play. Huarte still went on to win Notre Dame’s sixth Heisman.

Here are highlights of the game, narrated by Curt Gowdy:

1968
USC 21, Notre Dame 21
This time it was the No. 1 Trojans who had their perfect record spoiled by Notre Dame. O.J. Simpson was held to 55 yards and a touchdown on 21 carries by a fired up Irish defense in one of the most-watched games in history. Simpson was USC’s second Heisman winner.

1981
USC 14, Notre Dame 7
The Irish did a great job containing Marcus Allen, all things considered, holding USC’s fourth Heisman winner to a season-low 147 yards and a touchdown on 33 carries.

1987
Notre Dame 26, USC 15
Tim Brown scored on a 5-yard run and totaled 109 all-purpose yards in the meager 10 times he touched the ball. He would go on to win Notre Dame’s seventh Heisman.