When we think of the Heisman Trophy, we first think of the heroic deeds of great men on the football field. It just so happens that some Heisman winners were also heroic and great off the field while serving with distinction in our nation’s armed forces.

Of course, World War II and Korea, as well as the military draft that continued in the years after, made that possible in the early era of the Heisman. So, on this Veteran’s Day, 2018, let’s take a moment to remember and honor those Heisman veterans and their service.

The award’s first winner, Jay Berwanger of Chicago (’35), enrolled in the Navy’s flight-training program and became a naval officer during World War II. A punctured eardrum kept his successor, Yale’s Larry Kelley (’36), out of the war.

Kelley’s teammate, Clint Frank (’37), attained the rank of Lieutenant Colonel in the Army Air Corps, serving as an aide to General Jimmy Doolittle during World War II. Doolittle, as you may recall, was responsible for the daring bombing raids on Japan in the early years of the conflict.

The story of Iowa’s Nile Kinnick is a tragic one. The 1939 winner left law school after one year and enlisted in the Naval Air Reserve, reporting for induction three days before the attack on Pearl Harbor.  On June 2, 1943, Kinnick was on a routine training flight from the aircraft carrier USS Lexington, when his plane developed an oil leak. Kinnick was forced to execute an emergency landing in the water, but he died in the process. His body was never recovered and Kinnick became the first Heisman Trophy winner to die, a month and seven days shy of his 25th birthday. 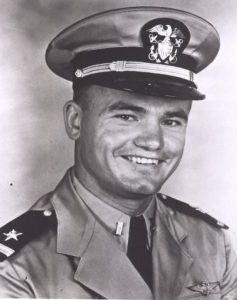 Tom Harmon of Michigan (’40) was also a pilot. After graduating, he enlisted in the Army Air Corps and was later awarded a Silver Star for his actions as a member of the 449th figher squadron. 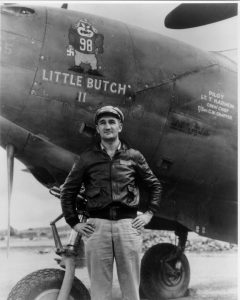 Another Big Ten winner, Bruce Smith of Minnesota (’41) served in the Navy as a fighter pilot. Smith’s moving speech while being awarded the Heisman came just a few days after Pearl Harbor:

“In the Far East, they may think American boys are soft, but I have had, and even have now, plenty of evidence in black and blue to prove that they are making a big mistake. I think America will owe a great debt to the game of football when we finish this thing off. If six million American youngsters like myself are able to take it and come back for more, both from a physical standpoint and that of morale. If teaching team play and cooperation and exercise to go out and fight hard for the honor of our schools, then likewise, the same skills can be depended on when we have to fight to defend for our country.”

Frank Sinkwich of Georgia (’42) was in the Marine Corps when he won his Heisman, but he was discharged  soon after due to flat feet. Notre Dame’s first winner, Angelo Bertelli (’43) was unable to attend the trophy presentation due to his being in Marine Corps training in early December of 1943. The initial ceremony was rescheduled and he accepted it later on January 12, 1944 in New York City.

Bertelli at Marine Corps training, Perris Island, 1942. He’s the one standing on the far left.

Ohio State’s Les Horvath (’44) was not only a junior lieutenant in the Navy, but also a dentist for the service. Army’s Glenn Davis (’46) served three years in the Army, while his teammate Felix ‘Doc’ Blanchard (’45) chose to embark upon a career in the U.S. Air Force as a fighter piliot. He garnered a commendation for bravery in 1959 after preventing his faltering plane from crashing into a village. He later flew 113 missions during the Vietnam War and retired from the Air Force in 1971 as a colonel. 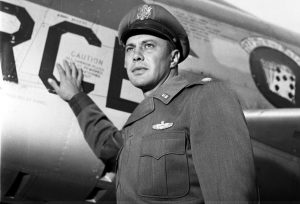 Notre Dame’s John Lujack (’47) spent his time in the Navy hunting German submarines in the English Channel as an ensign. SMU’s Doak Walker served in the Army for a year. Princeton’s Dick Kazmaier (’51) spent three years in the Navy and attained the rank of lieutenant.

Oklahoma’s Billy Vessels (’52) was later a U.S. Army officer. Irish winners John Lattner (’53) and Paul Hornung (’56) served in the Air Force and Army, respectively. Army’s Pete Dawkins (’58) became the highest-ranking Heisman winner, going on to become a brigadier general in the Army. He won a bronze star for his service in Vietnam. 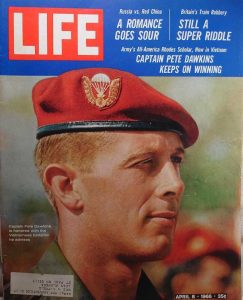 The last two Heisman veterans belong to the Navy. Joe Bellino (’60) served 28 years in the fleet and became a captain. Roger Staubach (’63), was a Supply Corps officer for the Navy at Chu Lai in Vietna, commanding 41 enlisted men. 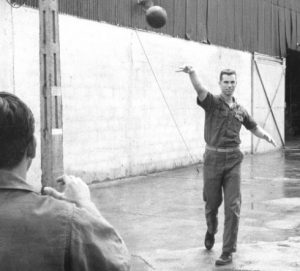 Staubach throwing the football around in Vietnam

Thank you for your service, gentlemen.