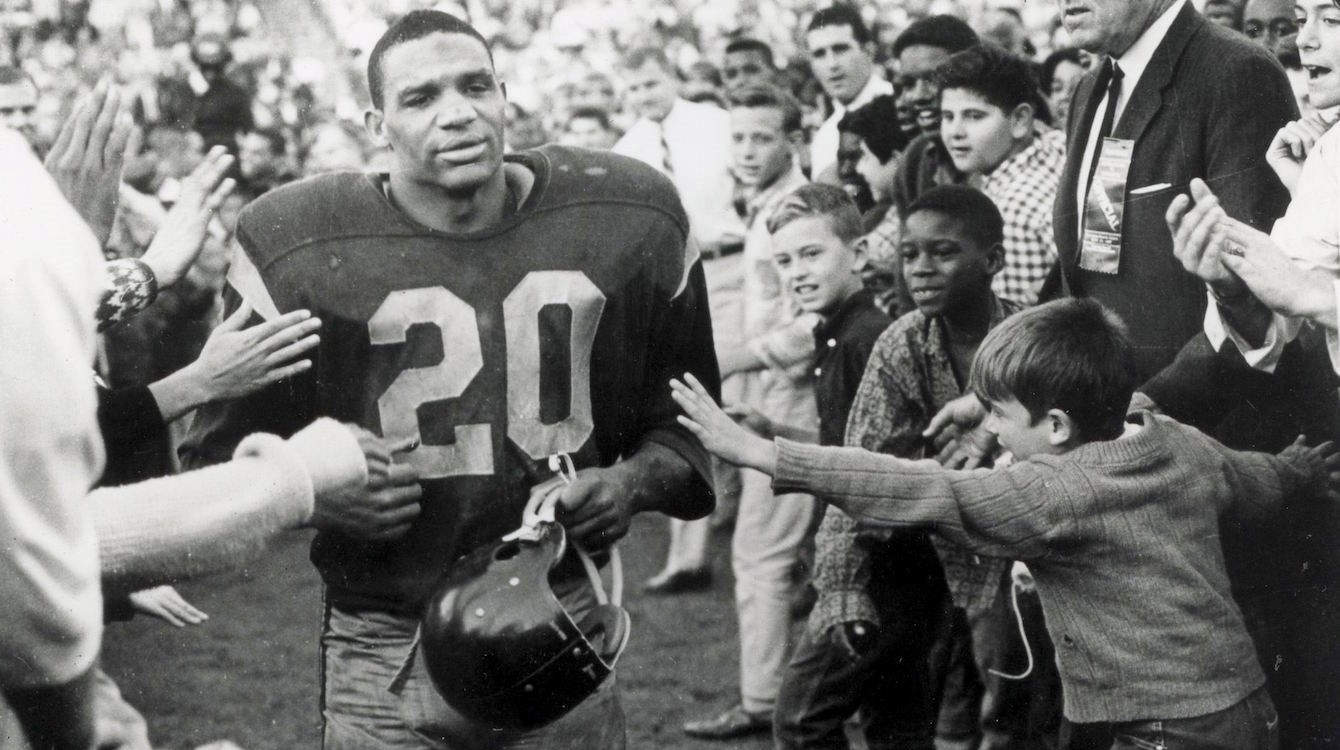 The 2015 college football season has been referred to by many observers as the “Year of the Running Back”—and for good reason. Talented runners like LSU’s Leonard Fournette, Ohio State’s Ezekiel Elliott, Florida State’s Dalvin Cook, Alabama’s Derrick Henry, Stanford’s Christian McCaffrey and Utah’s Devontae Booker have dominated the Heisman conversation this fall. But no matter where they placed in final voting for the award, they each owe a debt to the running back who hoisted the bronze statue 50 years ago this month—USC’s Mike Garrett.

When Garrett received this honor, he won his school’s first Heisman and helped revolutionize the running back position in the process. The 5-foot 9-inch, 190-pounder from Los Angeles carried the ball an NCAA-record 267 times in 1965, averaging nearly 27 carries per game in an era when more than 15 rushes in a game was rare.

Operating out of a standing position, hands on knees, in John McKay’s I-formation, Garrett became the prototype for the position’s future—a durable, hard-nosed competitor, around which an entire offense could be built. Garrett had both the strength and the balance to run between the tackles and the quick feet to break it to the outside. Overall, he was an excellent pass blocker, a soft-handed receiver, and a dangerous punt and kick returner. He even threw two touchdown passes as a senior.

“Without Mike Garrett, we might never have come to the place we are now,” former USC assistant coach Dave Levy told the Los Angeles Times in 1990.

Coach Levy was right. It was Garrett’s success that ultimately convinced O.J. Simpson to come to Troy. Simpson built on what Garrett did, which led to Anthony Davis and Ricky Bell, who was followed by Charles White, Marcus Allen and, for the most part, every other running back who has matriculated to USC with dreams of winning Heismans. In other words, Garrett was the founding member of “Tailback U.” and he didn’t just get things started for USC—his accomplishments were crucial to making the running back spot the “it” position in college football.

“I think it helped that my claim to fame—along with Jim Brown in the NFL—was that we were the first backs to start averaging 25 to 30 carries per game,” said Garrett, whose nickname was “Iron Mike.”

The running back position thrived in the twenty years following Garrett’s Heisman triumph, taking home fourteen Heismans, including eleven in a row from 1973 to 1983. The most successful programs of the 1970s—USC, Alabama, Ohio State, Oklahoma—depended on relentless ground games usually powered by elite running backs carrying the ball at least 20 to 25 times per game. Plain and simple, the running back was the best athlete on the field during that era.

Although Garrett eventually became a key player for the USC offense, it took some time for him to get there. The fourth of six children who grew up in a rough neighborhood of East Los Angeles, Garrett didn’t even have the Trojans on his radar growing up. Instead, he dreamed of playing for UCLA and Red Sanders right up until his development into an All-City running back at Roosevelt High, running for 1,467 yards as a senior

To Garrett’s disappointment, UCLA never came calling—the Bruins thought he was too small to play for them. That poor decision, allowed coach John McKay to swoop in and sign Garrett in 1962. In those days, freshmen were ineligible for varsity competition, so his main contribution to McKay’s first national title squad was playing the role of opposing running back on the scout team. McKay knew Garrett was someone special when his all-star defense had difficulty tackling him during Rose Bowl preparations.

Garrett saw his first varsity action as a sophomore in 1963, rushing for 833 yards, while also playing cornerback on defense. After a 948-yard effort in 1964, it occurred to McKay that Garrett was ready for more responsibility as a senior.

“We ran the ball and ran the ball, and he didn’t seem to mind it. So, being a very astute person, I said, ‘Well, let him have it.'”

The details of his remarkable 1965 season have faded a bit with time, but here are a few highlights to remind you of Garrett’s greatness that year:

— He rattled off five 100-yard games to start the season, piling up 852 yards while averaging 170 yards per game.
— He rushed for 172 yards and 3 touchdowns on 31 carries as the Trojans beat Oregon State, 26-12, in game three. It had been the best start to a season in Heisman history at the time. The Beavers were the defending Pac-8 champs and a controversial Rose Bowl pick over USC in ’64.
— He rumbled for a then-career-high 205 yards on 31 carries in a 14-0 victory over Stanford in game five.
— His march to break Fred Wendt’s 17-year-old NCAA single-season rushing record of 1,570 yards hit a snag against Notre Dame (43 yards) and Cal (67 yards), but his two punt returns for touchdowns against the Bears totaled a remarkable 161 yards.
— He truly earned his nickname against UCLA, carrying 40 times for 210 yards (both career highs) in a 20-16 loss.
— He closed out his college career by rushing for 112 yards and three touchdowns in a 56-6 rout of Wyoming.

Garrett finished the 1965 season with 1,440 rushing yards, the most since San Francisco’s Ollie Matson had 1,566 in 1951. He scored 17 touchdowns and threw for two more. His 3,221 career rushing yards was the third-best in NCAA history at the time.

“All I wanted to do was to play every game the best I could,” said Garrett. “There was only one game where I got shut down. Other than that one game, I had a great year.”

After USC, Garrett went on to more successes, both on and off the football field. He won a Super Bowl with the Kansas City Chiefs in 1970 and was twice named an American Football League all-star. In his eight professional football seasons, Garrett rushed for 5,481 yards, caught 238 passes for 2,010 yards, returned 14 kickoffs for 323 yards, and returned 39 punts for 235 yards.

Garrett retired from football after the 1973 season and went on to a variety of sports-related roles before settling in as USC’s sixth athletic director in 1993. During Garrett’s 17-year tenure, the Trojans returned to gridiron glory, winning national championships in 2003 and 2004 as well as two Heisman Trophies.

But that 1965 season and the Heisman award that came from will always loom largest in Garrett’s life. In those days, there was no ceremony for the Heisman announcement; the athlete was informed by a simple telephone call from New York’s Downtown Athletic Club. After his huge game against the Bruins on November 20th, his body bruised and battered from 40 tough carries, all Garrett could do was wait.

“I remember going to bed that night after that game wondering if I was going to get the call,” said Garrett. “I said to myself, you can’t do any better than what you did.  So I had a good night’s sleep.”