“The Heisman’s exclusive partnership with Campus Legends positions The Heisman Trophy Trust as innovators in both the digital space and Name, Image, Likeness (NIL) arena,” said Michael Comerford, President of The Heisman Trophy Trust. “The Trust is excited to work with Tim Tebow and the entire Campus Legends team to support our Heisman winners and Heisman aspirants, while also providing college football fans with memorable, limited-edition digital collectibles.”

Echoed Greg Simon, CEO & Co-Founder of Campus Legends: “As a company with a passion for and a sole focus on the collegiate sports market, we are thrilled to partner with an iconic brand in the Heisman Memorial Trophy. I’m proud of the Campus Legends mission. We are dedicated to supporting current and alumni athletes, and enabling equity across all current athletes, and I am humbled that the Heisman Trophy Trust shares our vision to pioneer this new digital landscape in a way that puts the athlete first.”

Co-founded by 2007 Heisman Trophy winner, Tim Tebow, Campus Legends is the premier college sports marketplace for officially licensed digital collectibles. Working with athletes, schools and other rights holders, every sale of a Campus Legends digital collectible contributes directly to the athlete, school or brand represented. A portion of all Campus Legends company proceeds will also contribute to the Campus Legends HH Foundation supporting former and current players, including past Heisman winners in need, whether due to injury or other forms of hardship.

Global sports and entertainment company Endeavor, who is deeply involved in the NFT space through its owned sports portfolio and on behalf of its talent roster, oversaw the development of this NFT partnership on behalf of the Heisman Trophy Trust: “We saw an incredible opportunity to bring together the legendary Heisman brand with Campus Legends to not only memorialize one of the most iconic awards in all of sport, but to also help elevate the great charitable work of the Trust,” remarked Robby Miller, Director of Partnerships at Endeavor. 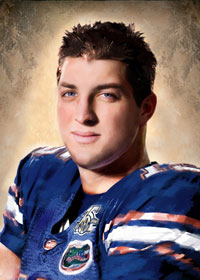 Tebow capped an unprecedented season by becoming the first sophomore in NCAA history to win the Heisman Trophy.…