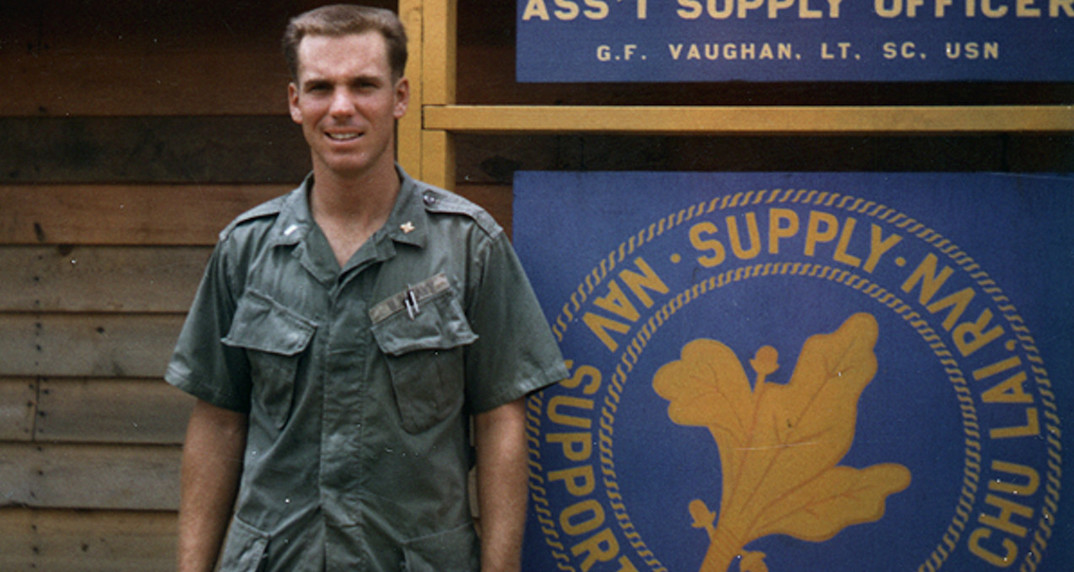 Roger Staubach during his service in Vietnam as a Supplies officer.

The Heisman Trophy’s first few decades is populated with winners who served in the nation’s military and it is always a worthy endeavor to look book on their history on Veterans Day.

1958 Heisman winner Pete Dawkins was just in the news, an honored guest at the Nov. 6 Army-Air Force game, speaking to the Black Knight squad after their big win over the Falcons.

Dawkins became the highest-ranking Heisman winner. First posted to the 82nd Airborne in 1963, he ascended to brigadier general in the Army ahead of his ultimate military retirement in 1983. He received two bronze stars for valor for his service in Vietnam and had commands in both the 7th Infantry and 101st Airborne Divisions.

Asked once about his affinity for the airborne branch, Dawkins said: “(It) was appealing because elite units, from Seals and Special Forces to airborne and Rangers, bear a strong resemblance to championship athletic teams in spirit, attitude and elements of success.”

The last Heisman winner who served was 1963 winner and Navy quarterback Roger Staubach, who served for two years in Vietnam as part of the U.S. Navy as a supplies corps officer and attaining the rank of lieutenant.

Interestingly, he was assigned to the Supply Corps because he was color blind, something missed during his pre-admission exam and something that would have precluded his service. He was allowed in the Supply Corps because “it did not necessitate being able to tell the difference between red (port) and green (starboard) lights or to discern the color differences in electrical circuitry.”

Staubach, who was stationed at a base in Da Nang for six months and did another half year at Chu Lai, serviced mainly Marines based in the area. He commanded over 40 men.

In an interview with the U.S. Army web site, he said he volunteered to join the service “because I wanted to give something back.”

“I came to love the Marine Corps,” he said in the U.S. Military article, adding that he loves all of the services “but the Marines, I saw them in action. Some of my teammates were Marines, some were shot and killed. It wasn’t a popular war but we were asked to do it. It was a shame how our Vietnam veterans were treated.”

1940 Heisman winner Tom Harmon enlisted in the Army Air Corps in November of 1941 and he served as a pilot. Twice, planes he piloted went down during World War II, included once in 1943 when, en route to North Africa, he was forced to parachute into a South American jungle, four days later finding safety.

He later was awarded a Purple Heart and a Silver Star for his actions with the 449th Fighter Squadron.

Iowa’s Nile Kinnick (1939), the Hawkeyes’ student body president as a senior, is the only Heisman winner to die in service and the first to die. He left law school after one year and enlisted in the Naval Air Reserve, reporting for induction three days before the attack on Pearl Harbor.

Per a biography called Kinnick: The Man and The Legend, he once wrote: “There is no reason in the world why we shouldn’t fight for the preservation of a chance to live freely, no reason why we shouldn’t suffer to uphold that which we want to endure. May God give me the courage to do my duty and not falter.”

On June 2, 1943, Kinnick was on a routine training flight from the aircraft carrier USS Lexington — this ship’s initial voyage — when his F4F Wildcat developed an oil leak. Kinnick was forced to execute an emergency landing in the water four miles from the ship, but he died in the process, five weeks shy of his 25th birthday.

It’s all the more poignant after reflecting back on part of speech after winning the Heisman: ”I thank God I was warring on the gridirons of the Midwest and not on the battlefields of Europe,” Kinnick said. “I can speak confidently and positively that the players of this country would much more, much rather, struggle and fight to win the Heisman award than the Croix de Guerre.”

The first winner of the Heisman Trophy, Jay Berwanger of Chicago (1935), enrolled in the Navy’s flight-training program and became a naval officer during World War II ahead of going into private business.

Clinton Frank (1937) attained the rank of Lieutenant Colonel in the Army Air Corps, serving five years during World War II, and also served as an aide to General Jimmy Doolittle.

Minnesota winner Bruce Smith (1941), like Kinnick, gave a similarly moving speech during his Heisman acceptance speech just days after the attack on Pearl Harbor. Going on to serve in the Navy as a fighter pilot, he said:

“In the Far East, they may think American boys are soft, but I have had, and even have now, plenty of evidence in black and blue to prove that they are making a big mistake. I think America will owe a great debt to the game of football when we finish this thing off. If six million American youngsters like myself are able to take it and come back for more, both from a physical standpoint and that of morale. If teaching team play and cooperation and exercise to go out and fight hard for the honor of our schools, then likewise, the same skills can be depended on when we have to fight to defend for our country.”

Georgia’s Frank Sinkwich (1942) briefly served in both the U.S. Merchant Marines and the Air Force.

Notre Dame’s 1943 winner, Angelo Bertelli, enlisted in the Marine Corps Reserves in 1942 while still with the Irish and he missed the initial trophy presentation while in Marine Corps training.

Bertelli rose to the rank of second lieutenant in 1944 and participated in combat operations in the Pacific in 1945, including at the Battle of Iwo Jima, where he was nearly killed by a closely landed mortar. He was stationed in Nagasaki when World War II ended. He laster joined the Marine Corps reserves and served until 1957, reaching the rank of captain.

Ohio State’s Les Horvath (1944) graduated from dental school in 1945 and joined the Navy, where he was a junior lieutenant for three years (1945-47) as well as a dentist. His service included travel to China as a naval dental officer.

Army’s Glenn Davis (1946) served three years in the Army and reported to Korea (before the war).

His teammate Felix ‘Doc’ Blanchard (1945) chose to embark upon a career in the U.S. Air Force as a fighter pilot. He garnered a commendation for bravery in 1959, while with the 77th Tactical Fighter Squadron, for preventing his faltering F-100 Super Sabre from crashing into a village. Despite it being on fire and having the opportunity to parachute to safety, he stayed with the plane and made a perfect landing.

He later flew 113 missions from Thailand during the Vietnam War, 84 of them over North Vietnam, and retired from the Air Force in 1971 as a colonel.

Notre Dame’s John Lujack (1947) bookended his time in South Bend around two years serving in the Navy. He served on naval submarines, hunting German subs in the English Channel as an ensign.

SMU’s Doak Walker served in the Army for a year in 1946 and, Like Lujack, saw his time in the service splitting in half his college play.

Princeton’s Dick Kazmaier (’51), the last Ivy Leaguer to win the Heisman, spent three years in the Navy and attained the rank of lieutenant.

Midshipmen 1960 Heisman winner Joe Bellino served through 1965, achieving the rank of lieutenant. He served on a destroyer during the Cuban Missile Crisis, his ship part of fortifications at Guantanamo Bay.

He became an executive officer of a minesweeping ship that was deployed three times in Vietnam. Following that, he spent another 24 years in the Navy Reserves, retiring as a captain.