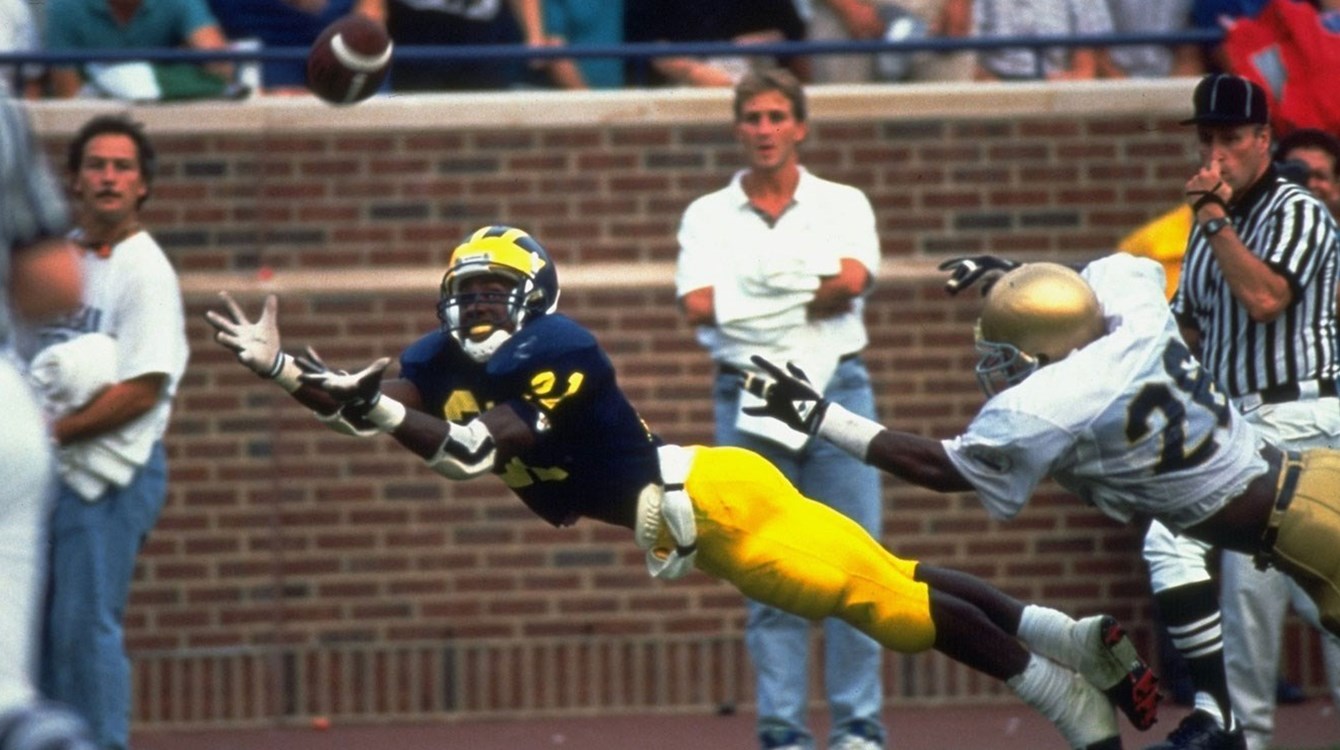 Former Michigan wide receiver Desmond Howard is responsible for one of the most iconic moments in Heisman history:

We all remember it. The scintillating return. The cheeky Heisman pose at the end. Keith Jackson gleefully confirming what we all knew: “Hellooo Heisman!”

After that 93-yarder against Ohio State, the trophy was a fait accompli for the junior from Cleveland, Ohio. Howard set or tied five NCAA and 12 Michigan records and led the Big Ten Conference in scoring with 138 points. He caught 61 passes for 950 yards and 19 touchdowns, rushed 12 times for 165 yards and two touchdowns and totaled 634 yards and two touchdowns on punt and kick returns. He ended up capturing 85 percent of the available first-place votes on his way to winning the 1991 Heisman Trophy.

But this week is the 27th anniversary of a play that was arguably more vital to Howard’s Heisman campaign than the more famous return against the Buckeyes.

On Sept. 14, 1991, the No. 3 Wolverines hosted the No. 7 Fighting Irish of Notre Dame. It was the second game of the season for both of these national title contenders. For Michigan, it was the beginning of a brutal early season slate that also included No. 1 Florida State and No. 9 Iowa. Notre Dame was a loaded team with Rick Mirer at quarterback, Jerome Bettis at running back and a star-studded defensive unit. Michigan had its usual deep corps of running backs, but what really made the offense go was the chemistry between quarterback Elvis Grbac and his favorite target, Howard.

This was a disciplined Michigan team and it showed that Saturday. The Wolverines didn’t commit a turnover and had just 21 yards in penalties. Howard helped his team move out to a 17-0 lead thanks to a 29-yard touchdown on an end around in the first half.

But Notre Dame crawled back into it behind two Mirer touchdown passes. Deep into the fourth quarter it was 17-14 and it looked like the Irish might pull off another miracle comeback.

Michigan, however, kept its composure and put together a drive that reached Notre Dame’s 25-yard line. The Irish defense stiffened and Big Blue faced a fourth-and-1.

Wolverines coach Gary Moeller decided to gamble and Grbac, after pumping once, floated a high-arcing pass into the corner of the end zone and what is now simply known as ‘The Catch’ took place:

It was this crucial play, against Notre Dame, on national television, to seal the game, that –more than anything else — made Howard a legitimate candidate for the Heisman Trophy in 1991. It became a staple of highlight reels all season long.

Howard really needed this play for his resume because two weeks later, after a bye, the Wolverines were overwhelmed, 51-31, by No. 1 FSU and its Heisman candidate quarterback,Casey Weldon. But the ‘Noles stumbled later that season against Miami and Weldon couldn’t overcome Howard’s late-season brilliance. He finished second in the Heisman vote.

It’s rare that a Heisman campaign can be distilled down to one or two plays, but Howard’s catch against Notre Dame and, later, his punt return against Ohio State, are prime examples of it.